Apple’s iBeacon has been hailed as the future of retail, and so far the indoor-positioning technology has made its way to big-time retailers like American Eagle and Macy’s. But context-aware data analytics should not just be for the big leagues, according to Swarm Mobile.

Today, the San Francisco startup is launching a device that collects data about customers in-store, and it’s aiming to capture the small business market.

The device, dubbed Swarm Portal, uses Apple’s iBeacon technology to track foot traffic in stores. You simply peel and stick the battery-powered, nest-like device in your store to gather traffic and sales data from customers. You can then use the portal iOS app to visualize the data collected by the device.

While Swarm Mobile has worked with Fortune 500 brick-and-mortars on expanding data analytics, the Portal package and its focus on small business echoes the reason serial tech entrepreneur and CEO of Swarm Rudd Davis founded the company in the first place.

Davis says he was inspired to create Swarm while trying to kick-start small-time retail growth for his parents’ hometown in Vermont.

“My folks were getting on in years and didn’t have too much saved up for retirement, [so] I ended up buying them the country store in their hometown,” he recalled. 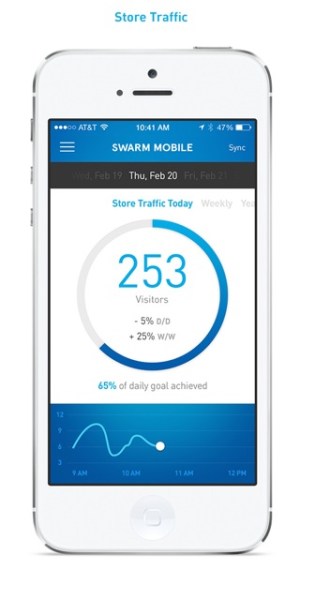 While scouring the Internet for resources to help his parents make decisions about where to cut costs and focus their energy for their brick-and-mortar business through data analysis, he realized the retail market was ripe for a technological intervention.

“I started looking for tools that were sophisticated yet simple,” he said. “There just wasn’t that much out there, and that’s what got me excited about the [retail] space.”

Two years after founding Swarm, Davis says he has come up with a wallet-friendly, context-aware analytics solution for small businesses without an IT department that still want to find out when to have the most amount of staff on duty or which hours are peak business hours for its store.

“We’ve designed this so that a single-location mom and pop store — really, a store like my parents’ store — can actually use it,” he said.

The device itself costs $79.99 and will identify the passage of people through a doorway to provide foot traffic metrics out of the box.

If the business owner is willing to fork over an additional $39.99 per month per store, the device can also feed more detailed information on transactions, item-level sales, and conversion rate — as in, how many people actually buy something once they are in the store. This mid-tier price point also bundles features to measure progress towards revenue goals over time and the effectiveness of marketing campaigns.

The top tier Portal Presence package, priced at $79.99 per month per store, adds the ability to see where in the store customers go and how long they stay there — provided they have downloaded the retailer’s app. The Presence package also allows the business to create customer profiles and measure walk-by traffic.

The Swarm Portal joins a growing array of iBeacon-certified, context-aware apps that have been popping up in the retail arena since the launch of the Bluetooth technology with iOS 7.

Other context-aware services include Estimote, a company that specializes in sensors that allow large retailers to offer location-based micro-services like facilitating payment transactions, and ShopKick, a shopping app that serves up nearby discounts based on the app user’s location in participating retailers.

Currently, the Portal app is only available on iOS, although Swarm plans to expand to the Android platform for devices compatible with Bluetooth 4.0. Davis says the device has received around 10,000 pre-orders prior to the launch date.