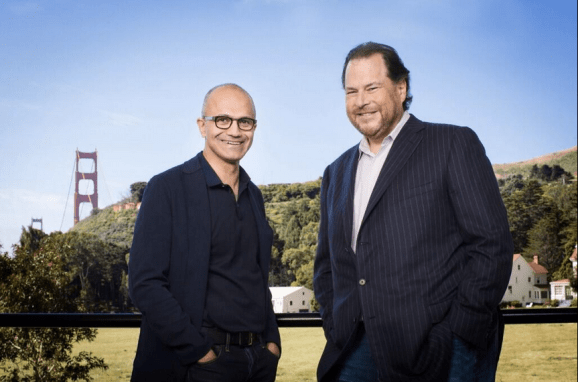 Salesforce.com and Microsoft have competed with one another for 15 years in the lucrative market for big-business software. But now the enterprise giants are putting their differences aside — at least partially.

The two companies announced a bevy of integrations today, including the capability to connect data from Salesforce software into Microsoft’s Excel and Power BI for Office 365 software. People will also be able to work with Office files inside of Salesforce, too.

Salesforce will make its Salesforce1 platform available on Windows and Windows Phone 8.1 systems to enable people to run its software, and Microsoft’s cloud-based Office 365 software will integrate more deeply with Salesforce software.

Still, the news speaks to Microsoft’s willingness to go against its own traditions. That’s the whole Satya-Nadella-will-challenge-convention argument.

It’s unclear if today’s partnership will ease up bigger-picture tensions between the two partners, which have been embroiled in litigation in the past. (Not to mention that Salesforce’s whole cloud-based “no software” pitch goes right at the heart of Microsoft’s installed-software business.) At one point, Salesforce employees were not permitted to attend Microsoft’s Worldwide Partner conference for this year.