The SVForum honored four of the most successful tech heroes last night with its annual Visionary Awards.

They were honored as much for being successful as well as giving Silicon Valley a conscience with it comes to social and educational issues.

“This is the Oscars of Silicon Valley,” said Adiba Barney, the new chief executive of SVForum, in an interview with VentureBeat. “We want people to understand the value of having visionaries like these people. We want to recognize and reward them.”

The 17th annual event was held at the beautiful Los Altos Hills chateau of Kelly Porter, managing director at Woodside Capital Partners. It was a good setting to remind us of the rewards of Silicon Valley offers its most successful residents, who are having a banner year because there have been many successful initial public offerings and tech stock prices are at a high.

Everything about the scene seemed aristocratic, something that Silicon Valley’s elite would care about but not the larger population.

But the exclusive group wasn’t there merely to celebrate its own achievements. The honoree talks were like inspiring graduation commencement speeches, meant to guide the next generation to not only make money, but change the world and Silicon Valley. 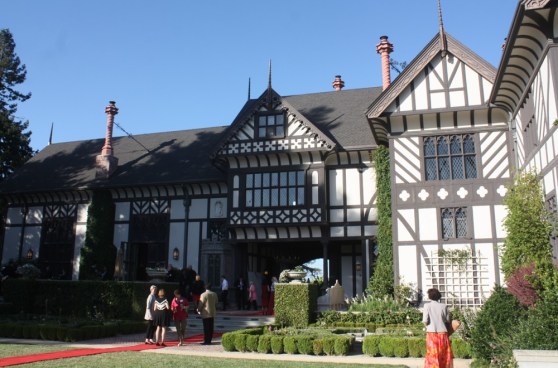 Steven Levy, a senior writer at Wired, introduced O’Reilly, the creator of tech media publication and conferences, as an advocate of innovation and positive change, driven by technology.

“At the time I was writing about him, he was starting a magazine about the ‘maker’ movement,” or do-it-yourself hardware, Levy said. “That was an odd term. Now even the President is talking about the Maker movement. That is so Tim. He is optimistic, but fearless about calling out villainy and greed. He is the conscience of this industry.” 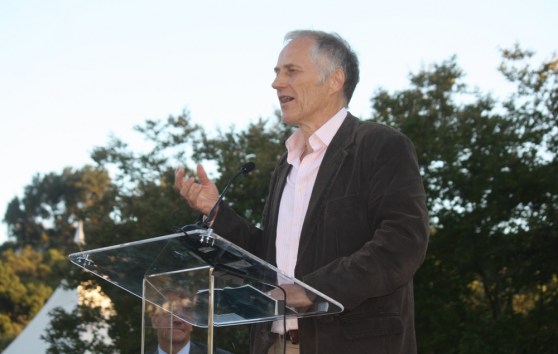 In his acceptance speech, O’Reilly said he spent the past year in Washington, D.C., with his fiancé Jennifer Pahlka, helping with the Code for America, a nonprofit that wants to modernize government using the help of tech-savvy professionals. He has specialized in watching people who do things early, like one hobbyist who was making a programmable cat feeder from an old VCR.

“I thought, ‘People are starting to hack on hardware again,'” he said.

He said he is passionate about people who are trying to change the world.

“The thing we should all be looking for are people who want to make a difference,” he said. “I’m a big believer in the Silicon Valley religion of the power of markets. But I also believe in our obligation to give back, and to give back in the way we do business, to create more value than we capture for ourselves.”

Right now, he is trying to change government, which he notes is a third of our economy. He noted the failure of Healthcare.gov at the outset led to a great turnaround as tech-savvy experts came in to fix it.

“That is not something we should allow to fail,” he said. “That is something we must stand up for and make work. We want to show how technology can be applied to fix our problems. We need to celebrate not just success, but to celebrate people who make a difference. It starts with people who do things for love, with no expectation of return. Some of that turns into enormous financial success, and then some of it goes back into doing it for love. Those people who worked tirelessly on Healthcare.gov are heroes.” 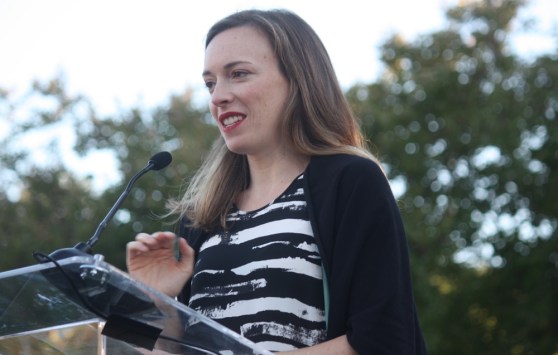 “Before Kiva, they didn’t know how they going to feed their children, and after Kiva, they were employing their entire neighborhood,” Aslan said. “That transformation is something I will never forget. It was a reminder of what it means to be a visionary. It’s somebody who can look into the future, see a problem, visualize a solution, and draw the solution to the present.”

Kiva has now made more than $500 million in loans. Jackley also started ProFounder, an equity crowdfunding platform. The Securities & Exchange Commission threatened to shut it down, so Jackley helped change the law to make it legal. The startup wasn’t successful, but it was another expression of Jackley’s belief in the power of crowdsourcing and the sharing economy.

Jackley, now the mother of 2.5-year-old twins, is now working on a startup to help parents, even though, Aslan said, “it’s hard to see beyond the next diaper while tandem breastfeeding.” In accepting her award, she said she moved from suburban Pennsylvania to Silicon Valley 14 years ago with the “opposite of a vision for my future” with a degree in philosophy and poetry. She moved into a house with a bunch of other young entrepreneurs in Palo Alto, and took a job as a temp admin at Stanford’s Center for Social Innovation.

“I just knew I wanted to help people, I had a lot of questions, and this seemed like a good place to find answers,” she said. “It didn’t take long to learn this community was something special.”

She said, “People would talk all the time about the future. Then they said let’s go make this future happen. This was the beginning of my understanding of vision and entrepreneurship, about telling a new story about the future and making it happen.” In 2003, she heard a speech at Stanford by Muhammad Yunus, before he won a Nobel Peace Prize for starting microfinance, about the “entrepreneurial poor” who want to work but just need a loan to get started. She quit her job, moved to East Africa, and worked for a nonprofit Village Enterprise Fund, which made $100 grants. She went back to Stanford, got her MBA, and helped start Kiva.

She said, “With my work, I had the privilege of investing in companies that are part of the new sharing economy. We are moving toward this future that is more about access versus ownership, more about ours, versus mine. That’s the kind of future I want to live in.”

Quoting from Chinese inventor Lin Yutang, she said, “Hope is like a road in the country. There was never a road. But when many people walk on it, the road comes into existence.” 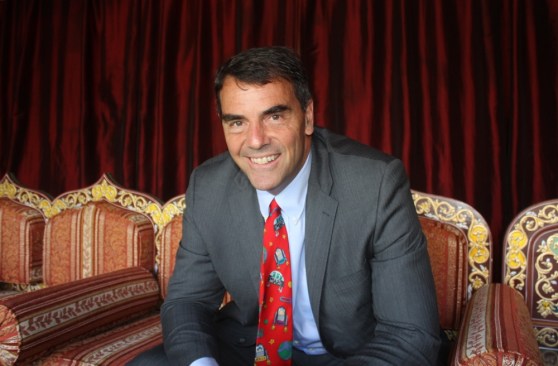 Above: Tim Draper of DFJ

Billy Draper, the son of Tim Draper, introduced his father with some levity. The elder Draper, who is the first second-generation Visionary award winner after his father William Draper, funded 10 billion-dollar companies such as Skype. Billy Draper said that his father was ranked No. 56 on the most successful Harvard graduates.

“I think that there’s room for improvement on that one,” Billy Draper said. “He was also No. 1 on mostly likely to have lost something in his eyebrows list.”

Tim Draper, who backed companies like Hotmail and started Draper University of Heroes, is sponsoring the Six Californias initiative, a serious effort to fix the state’s problems by dividing it into six more governable states. He said that the state is a lot like a monopoly, with high costs, low satisfaction, and little choice for those who deal with it. He came up with the initiative after trying to fix California’s educational system for years.

“I marveled at the number of choices we have in the private sector because entrepreneurs,” he said. “Then I realized we only have one choice of government if we want to live in this kind of weather.”

He noted that most of his great investments were accidental. He discovered Skype by following the file-sharing business and how it was disrupting music.

“If you want to be a visionary, go out there and have some accidents,” he said, tossing a glass of water out into the crowd. 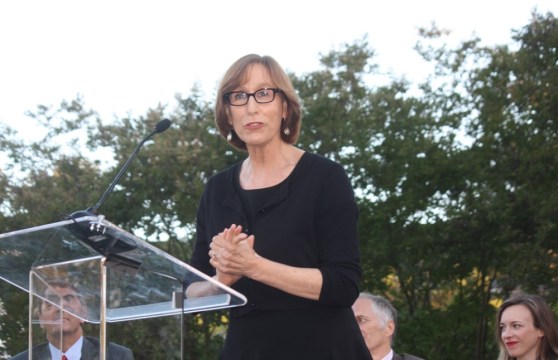 Tom Byers, a professor at Stanford and faculty director at the Stanford Technology Ventures Program, introduced Seelig, who has taught innovation and creativity for the past 15 years. One of her students, he noted, said, “Even though she’s a teacher, she still admits she is a student.” Another said, “Tina is a leader. Not by example, but by inspiration.”

Seelig thanked her parents, who taught her “how to ask really hard questions.” She said her husband asks her really hard questions. And she said her son, Josh, has been her own role model. He’s a grad student at Stanford now. With Byers, she said, “Together, we get to ask really big questions. How can we prepare the next generation entrepreneurs to repair the problems of the world and make the world a better place.”

In an interview, Seelig said that creativity can be taught, and it can be taught whether times are good or bad.

“You give people a set of tools, techniques, and the mindset necessary for it,” she said. “Creativity is the result of knowledge, skills, and attitudes that allow you to be a problem solver. You can teach people how to take risks, how to fail fast and learn from their experiences, how to challenge assumptions, how to connect ideas, how to ask the right questions. If you ask the wrong question, you get an incremental solution. If you frame the problem differently, it opens a whole world of solutions. ” 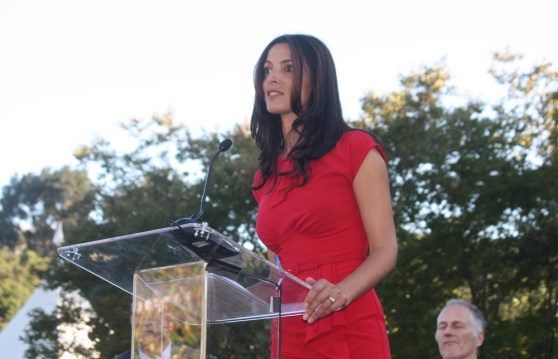 Above: Adiba Barney, CEO of SVForum

Barney, the CEO of the organization giving out these awards, said she wants to breathe new life into the 30-year-old organization.

The SVForum was formerly the SDForum, which merged in 2012 with the Silicon Valley Academy of Startup Entrepreneurs (SVASE), another networking organization. It holds more than 200 events a year, and Barney wants it to “coolify” it by making it better known among a new generation of entrepreneurs.

“Every organization that has been around for a while needs to rejuvenate,” she said in an interview with VentureBeat. “That’s my role. We have worked with the typical Silicon Valley ecosystem. And as you know, it has changed.”

The group wants to do more events in San Francisco, which is the new epicenter of the tech boom. She also wants it to be global, creating ambassadors to innovation hubs around the world.

“It’s important that Silicon Valley has greater knowledge about what is happening around the world,” she said.

One new initiative is the organization’s World Cup startup competition that took place on May 20. It pitted 30 startups against each other in categories like enterprise, next-generation technologies, digital media, educational technology, and health. SVForums is also doing a conference on education tech in San Francisco on June 24.

Porter has hosted the event for years.

“The companies that are generating the majority of revenues and profits in our ecosystem have been around for a while, and older organizations don’t always get the respect they deserve,” he said.

“Innovation is alive and well. It’s a great time to start a company. Lots of companies are getting funded. M&A is double what it was last year….Pizzas will soon be delivered by drones. It just doesn’t get any better than this.”