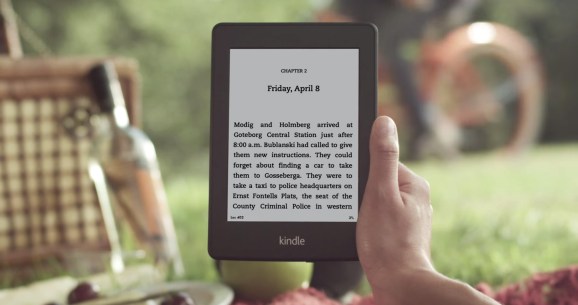 Amazon is integrating its e-book and audiobook offerings so that users can easily switch between reading a book and listening to it.

Amazon’s Whispersync for Voice service, which offers “audio upgrades” for books purchased through Kindle, now works inside Kindle’s iOS and Android apps, Amazon announced today. If you buy the Audible version of a Kindle book — upgrade prices range from $1 to $4 — you can now switch between reading and listening without leaving the Kindle app. (Previously, it would boot up the audiobook in Audible’s app.)

“Integrating professional narration into our Kindle apps means you never have to put down a favorite book,” said Russ Grandinetti, senior vice president of Amazon Kindle, in a statement.

When you boot up Whispersync, it doesn’t begin the audiobook at page one; instead, it considers the last page read in your e-book (that’s the ‘sync’ in Whispersync).