PARIS — École 42 might be one of the most ambitious experiments in engineering education.

It has no teachers. No books. No MOOCs. No dorms, gyms, labs, or student centers. No tuition.

And yet it plans to turn out highly qualified, motivated software engineers, each of whom has gone through an intensive two- to three-year program designed to teach them everything they need to know to become outstanding programmers.

The school, housed in a former government building used to educate teachers (ironically enough), was started by Xavier Niel. The founder and majority owner of French ISP Free, Niel is a billionaire many times over. He’s not well known in the U.S., but here he is revered as one of the country’s great entrepreneurial successes in tech.

He is also irrepressibly upbeat, smiling and laughing almost nonstop for the hour that he led a tour through École 42 earlier this week. (Who wouldn’t be, with that much wealth? Yet I have met much more dour billionaires before.)

Niel started École 42 with a 70 million euro donation. He has no plans for it to make money, ever. 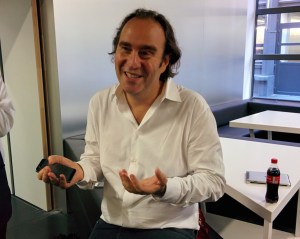 “I know one business, and that’s how to make software,” Niel said. “I made a lot of money and I want to give something back to my country,” he explained.

To make the school self-sustaining, he figures that future alumni will give back to their school, just as alumni of other schools do. If a few of them become very rich, as Niel has, perhaps they, too, will give millions to keep it going.

The basic idea of École 42 is to throw all the students — 800 to 1,000 per year — into a single building in the heart of Paris, give them Macs with big Cinema displays, and throw increasingly difficult programming challenges at them. The students are given little direction about how to solve the problems, so they have to turn to each other — and to the Internet — to figure out the solutions. 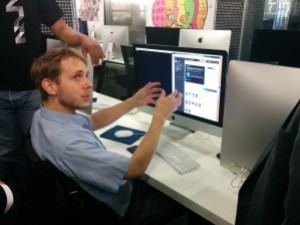 Above: A student at Ecole 42 explains how he created a ray tracing program. Six months before he knew nothing about programming.

The challenges are surprisingly difficult. One student I talked with was coding a ray tracer and building an emulation of the 3-D dungeon in Castle Wolfenstein within his first few months at the school. Six months earlier, he had barely touched a computer and knew nothing of programming. He hadn’t even finished high school.

In fact, 40 percent of École 42’s students haven’t finished high school. Others have graduated from Stanford or MIT or other prestigious institutions. But École 42 doesn’t care about their background — all it cares about is whether they can complete the projects and move on. The only requirement is that they be between the ages of 18 and 30.

“We don’t ask anything about what they’ve done before,” Niel said.

Yet École 42 is harder to get into than Harvard: Last year, 70,000 people attempted the online qualification test. 20,000 completed the test, and of those, 4,000 were invited to spend four weeks in Paris doing an intensive project that had them working upwards of 100 hours a week on various coding challenges. In the end, 890 students were selected for the school’s inaugural class, which began in November, 2013. (The average age is 22, and 11 percent of the first class is female.)

890 students out of 70,000 applicants means an acceptance rate a little north of 1 percent, or if you only count those who completed the test, 4.5 percent. By contrast, Harvard accepts about 6 percent of its applicants. And, even with financial aid, it charges a whole lot more than zero for its classes.

The upshot: If it works, the school’s course of education will produce coders who are incredibly self-motivated, well-rounded in all aspects of software engineering, and willing to work hard. (The four-week tryout alone, with its 100-hour weeks, blows away the French government’s official 35-hour-work week.)

Nicolas Sadirac, a French entrepreneur and educator, is the school’s director. Before École 42 he ran Epitech, a well-regarded, private, for-profit school that trained software engineers. 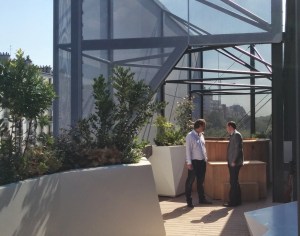 Above: Ecole 42 includes a few extra amenities — like a hot tub on the roof deck.

All of École 42’s projects are meant to be collaborative, so the students work in teams of two to five people. At first glance, the École’s classrooms look a little bit like a factory floor or a coding sweatshop, with row after row of Aeron-style chairs facing row after row of big monitors. But a closer look reveals that the layout is designed to facilitate small-group collaboration, with the monitors staggered so that students can easily talk to one another, on the diagonals between the monitors or side by side with the people next to them. Students can come and go as they please; the school is open 24 hours a day and has a well-appointed cafeteria in the basement (with a wine cellar that can hold 5,000 bottles, just in case the school needs to host any parties).

Students share all of their code on Github (naturally). They communicate with one another, and receive challenges and tests, via the school’s intranet. Everything else they figure out on their own, whether it means learning trigonometry, figuring out the syntax for C code, or picking up techniques to index a database.

Tests are essentially pass-fail: Your team either completes the project or it doesn’t. One administrator compared it to making a car: In other schools, getting a test 90 percent right means an A; but if you make a car with just three out of four wheels, it is a failure. At École 42, you don’t get points for making it part way there — you have to make a car with all four wheels.

The no-teachers approach makes sense, as nearly anything you need to know about programming can now be found, for free, on the Internet. Motivated people can easily teach themselves any language they need to know in a few months of intensive work. But motivation is what’s hard to come by, and to sustain — ask anyone who has tried out Codecademy but not stuck with it. That has prompted the creation of “learn to code” bootcamps and schools around the world. École 42 takes a similar inspiration but allows the students to generate their own enthusiasm via collaborative (and somewhat competitive) teamwork. 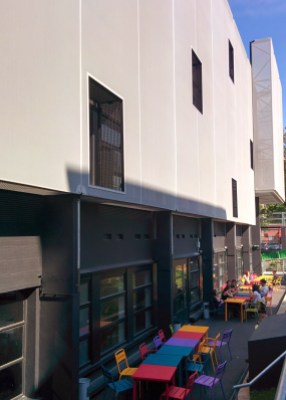 Above: Exterior view of Ecole 42.

Sadirac and Niel say that some prestigious universities have already expressed interest in the school’s approach. The two are considering syndicating the model to create similar schools in other countries.

But even if they never expand beyond Paris, École 42 could become a significant force in software education. France already has a reputation for creating great engineers (in software as well as in many other fields).

If École 42 adds another thousand highly-motivated, entrepreneurial software engineers to the mix every year, it could very quickly accelerate this country’s competitiveness in tech.

And the model will force schools like Harvard to make an extra effort to justify their high tuitions. If you can get training like this for free, and you want to be a software engineer, why go to Harvard?

Disclosure: My airfare and hotel to France were paid for by BPIFrance, a state-owned investment bank.