Texting, emojis, and lolspeak (the awful Internet patois derived from LOLcats) are destroying the English language. But with its latest app, Ginger hopes to strike a blow for quality writing.

Ginger Page, now available for iOS, Android, major web browsers, and PCs, is a souped up spin on grammar correction. In addition to checking your spelling and offering synonyms, Ginger’s technology can also offer up better ways of phrasing entire sentences.

“We see ourselves as trying to raise the level of English from the pre-mobile days,” said Ginger CEO Maoz Schact in an interview with VentureBeat. “We’re able to make you look good on your mobile with minimal effort.” 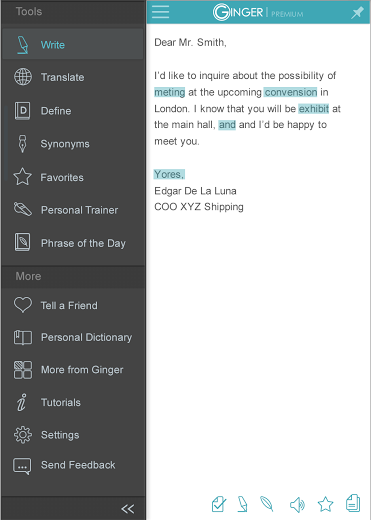 Above: Ginger Page on iOS

Ginger’s natural language processing engine is based on semantic analysis of high-quality writing from around the Web. It’s also aware of the context of what you’re writing about, so its recommendation should actually be useful. Ginger started developing its technology for people who use English as a second language, but its latest apps seem useful for anyone who wants to seem like a competent writer.

The company recently sold its virtual personal assistant business to Intel for around $30 million, which came on top of its $20 million in funding. Now, Ginger is ready to focus on building up its language correction business.

The Ginger Page experience differs depending on the platform you’re using. On the iPhone, it’s a standalone writing app, while Android users also have the option of using Ginger as a replacement keyboard to correct their writing in any app. Naturally, Schact assured me that Ginger is also working on an alternative keyboard for iOS 8, following Apple’s decision to open up its mobile platform.

On all of its available platforms, you just need to hit a button in Ginger Page to have it start analyzing your text. I received some helpful tips on both the Ginger iPhone app and Chrome extension, though Ginger generally performed better for longer phrases and sentences. Getting writing suggestions typically took just a few seconds (as with most apps these days, Ginger requires a network connection).

Schact envisions the app being useful to anyone who wants to appear a bit smarter on their social channels. But he also noted that several professional writers are using Ginger to proofread themselves.