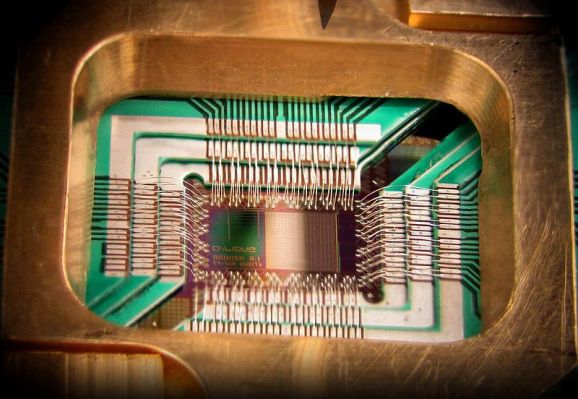 If you’re a conventional computer worried about being laid off — along with thousands of your fellow silicon units — by those new quantum computers, you may be able to rest easier.

A new study published yesterday in Science magazine could not verify that the D-Wave Two — the only brand name so far for the slippery technology — is actually that much faster than traditional supercomputers:

“The D-Wave computer, marketed as a groundbreaking quantum machine that runs circles around conventional computers, solves problems no faster than an ordinary rival, a new test shows. For random test problems, the time it took the D-Wave machine to solve a problem increased exponentially with the problem’s size, just as with a conventional computer, reports Matthias Troyer, a physicist at the Swiss Federal Institute of Technology in Zurich, and colleagues. …”

The researchers focused on whether the time needed to solve a problem increases proportionally to the size of the problem. The quantum computer is expected to solve larger problems much faster than ordinary machines. D-Wave, the Canadian parent company of the same name, has claimed its technology can be more than 35,000 times faster than a comparable traditional computer.

“This is likely the most thorough and precise study that has been done on the performance of the D-Wave machine,” Texas A&M computational physicist Helmut Katzgraber told Science.

The D-Wave Two made news last May for the simple reason that someone bought it. A collaboration between Google, NASA, and the Universities Space Research Association snapped one up for an undisclosed price — although a previous model cost $10 million.

It was only the second D-Wave Two, the only commercially available quantum computer, that the Canadian company had sold. (Lockheed had scooped up the first.) It resides in a special research facility at NASA’s Ames Research Center in Moffett Field, Calif. In the newest test, the research team used the Lockheed machine.

Quantum computers employ quantum bits, or qubits. Instead of the classic 1s and 0s of traditional digital computing, qubits can be both at the same time — one of the many charming but illogical properties of the quantum or sub-atomic world. There are 512 qubits in the D-Wave.

Instead of classical computing’s “logic gate” model, which controls the flow of digital logic, the D-Wave uses the states of the qubits to arrive at a solution. In particular, the D-Wave is a “quantum annealer,” which means that a problem gets solved when the qubits reach their lowest energy state. It also means that the machine is not an universal computer, able to tackle any computational problem, but is supposedly killer on optimization problems.

Optimization problems meet multiple requirements at once to find the best choice, like finding the lowest-energy protein fold or calculating the best route among many that is the fastest, uses the least fuel, reaches the most customers and so on. Google thinks it’s also particularly good at machine learning, when data is analyzed to find a model for predictions.

In addition to proving the superiority of quantum computing speed, there’s also been the challenge of proving that the D-Wave’s computational process is really quantum-based processing.

D-Wave says it is. But quantum computing relies on one of the weirdest properties known to modern science – quantum entanglement, in which one of a pair of sub-atomic atomic particles on, say, opposite sides of the galaxy can immediately react to a change in the other one. Einstein famously called entanglement “spooky action at a distance.” Nobody understands it, and yet it is central to the D-Wave.

Giving the many processes understood barely or not all, it could be that the researchers are simply using the wrong tests on the D-Wave, which is the position of its parent company.

Its director of business development, quantum-computer scientist Colin Williams, has said that the research team’s benchmark problems were “not at all the right choice for probing a quantum speedup.” It may also be that we’ll have to wait until there’s a universal quantum computer for the real differences to show.

Or we may yet discover that it’s like being unimpressed when a superhero, asked to show his barely-understood super-strength, pushes a big rock.

Only later do we discover that, in moving the rock, he actually moved our planet out of its orbit.