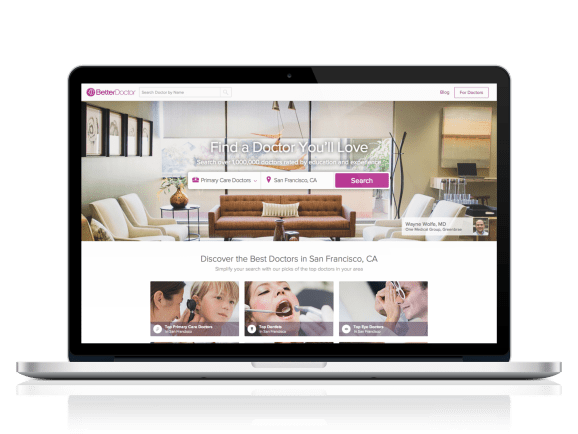 Physician referral has become a big business as people begin to think less like passive patients and more like health care consumers.

Case in point is San Francisco-based BetterDoctor, which operates an online referral service for dentists and doctors (including specialists). Dentists and doctors can claim a hosted profile page where they can promote their service. If a patient likes what they see, they can book an appointment at the site.

BetterDoctor matches consumers with providers in their area that will accept their insurance plan.

According to an SEC filing, the company is almost finished raising a $10.4 million in new venture funding.

Once completed, the new round will put the company’s funding total at $13.7 million.

BetterDoctor had previously attracted $2.6 million in seed funding. The funding was provided by SoftTechVC and Burrill & Co., with participation from 500 Startups, among others.

BetterDoctor rates care providers on their patient reviews and experience level. It also ensures the professionals they recommend have their medical license, have undergone a malpractice screening, and have clean discipline records.

The company earns money by providing dentists, doctors, and specialists with an online presence on which they can connect with new customers.

In the era of Yelp, opening online marketing channels has become crucial for dental and medical groups.

BetterDoctors was founded in 2011 by chief executive Ari Tulla and chief technical officer Tapio Tolvanen and went nationwide in 2012.