Amazon’s Fire TV sucks up as much as 80GB of data per day for some of its owners, but the cause isn’t Fire TV’s “ASAP” feature, Amazon claims. Instead, the company tells VentureBeat that a catastrophic screensaver bug is responsible.

“We have confirmed this issue was not caused by ASAP,” Amazon spokesperson Kinley Pearsall told VentureBeat today.

“There is a small possibility if a customer uses the ‘mosaic’ feature—not the default setting—on the screensaver, images will not be cached,” Pearsall said. “We’re working on a software update that will fix the bug, and in the meantime customers can turn off the mosaic view for the screensaver to avoid the issue.”

Amazon says it has not heard about this issue affecting other customers, but several folks in a Hacker News thread say they’ve also seen their data use spike due to the Fire TV.

That’s proven problematic for folks with capped data plans, like Tyler Hayes, who yesterday wrote a blog post exposing the Fire TV as a data hog. With his Fire TV plugged in, Hayes’ daily data usage regularly topped up to 60 GB. After he unplugged the Fire TV, it never reached more than 20GB per day. 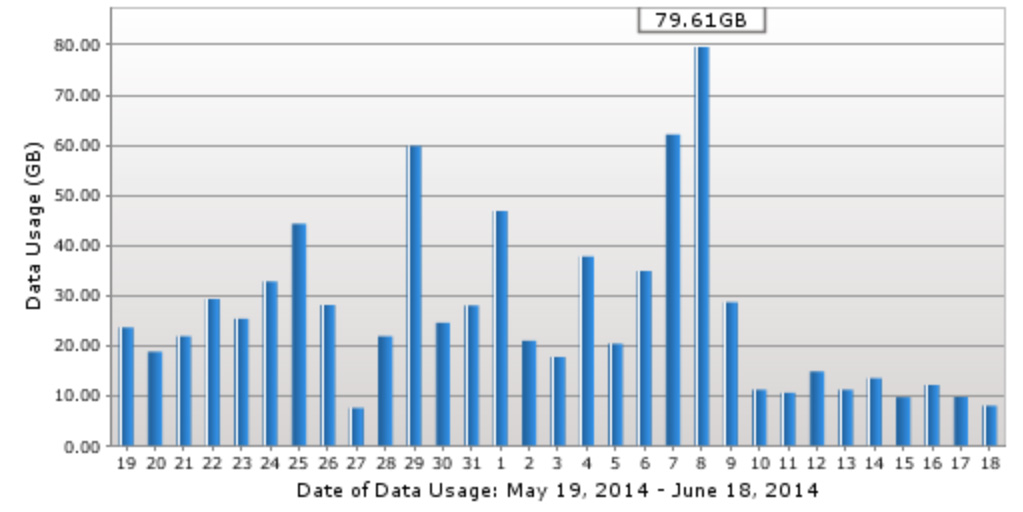 Above: A graph showing Tyler Hayes’ daily data use.

There is no option to turn off “ASAP,” making it a likely culprit for Fire TV’s data problems. But Amazon says that pesky “mosaic” screensaver is to blame.

“A big thanks to this customer for helping us find an edge case bug related to our screensaver,” said Pearsall.

Whatever the cause, Amazon will surely update its media box so it stops yanking down hundreds of gigabytes of data per month while idle. That’s not the type of feature differentiation Amazon wants as it fights Apple and Roku for space in your media center.