A tiny Seattle-based company thinks we’re doing it all wrong.

In the bad old days of enterprise tech, integration of services was a painstaking, manual process that required plenty of developer hours, more than a little blood-sweat-and-tears, and occasionally a vital organ or spare limb sacrificed to appease the gods of silicon and electrons.

In the modern new days of API-speaking enterprises apps, things are definitely easier, but there’s still sweat, some blood, and more than a few tears, since manually integrating APIs isn’t always (shockingly) as easy as it is marketed.

Azuqua, the afore-mentioned tiny Seattle-based company, is building a visual glue stick that allows you to connect disparate web services via click, point, drag, and tap. Currently the company has hooked up 24 services, including Azure, Salesforce, Dynamics CRM, Twitter, Facebook, and LinkedIn, and today Azuqua is launching its first live services, each called a “Flõ,” in the marketing automation space. That’s just the beginning, CEO Nikhil Hasija told me, as the company will be releasing additional flows for many, many areas.

Essentially, it’s a IFTTT for the enterprise.

“The genesis moment was when I was giving a talk in Berlin,” Hasija says. “To get my head screwed on right I took a walk on the show floor, and saw vendor after vendor with banners about cloud integration. That felt wrong, and the reason it felt wrong was that cloud was changing the paradigm, and the old way of integration was no longer going to apply, but people were trying to fit the old way of doing things inside the new reality.”

Currently, the examples Azuqua has seem fairly simple. One checks Twitter for negative comments about your company, and if it finds them, adds an action item in your CRM system. Another monitors news posts, summarizing articles about you, and emails them to you. Yet another finds positive mentions about your product in a certain defined location, and adds them to a nurture campaign that you can advertise against or follow up manually. 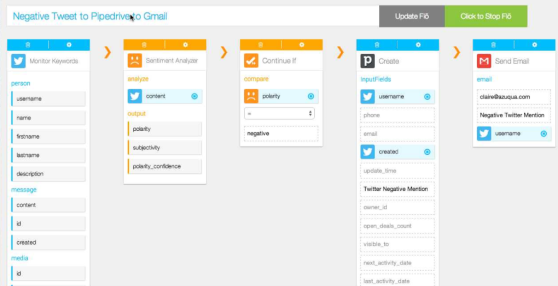 Above: Building a Flo via drag and drop

The magic, however, lies in two things.

One, you’re stringing together five or ten services via drag-and-drop, to first of all get content through one service, then take it through a sentiment analyzer (another service), then apply logic to it, then extract structured data from it, then perform actions on it. Two, while there are pre-built “Flo” streams so you can get going quickly, you can build anything you want with the system … which means that the customizable opportunities are limitless.

Right now Azuqua has focused on marketing technology: social media, marketing automation, and CRM. But that’s just a proof point and early beachhead for the company. Hasija plans to do similar things for many different areas of the enterprise, perhaps all of them. 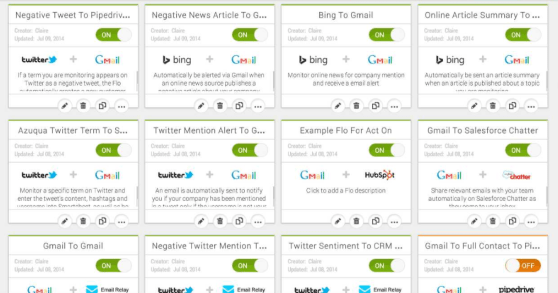 “People will connect more than one service as part of their business processes,” he told me. “And those will predominantly be in the cloud … where the movement of data will no longer suffice. Processes need to have logic, need to have the ability to transform data, enrich it, validate it, and put a workflow plus an external logic orientation on it.”

And as we’re building our company infrastructure more and more via the cloud and SaaS services, simple ways to do exactly that will become more and more important. As will the ability for relatively non-technical people to integrate, mix-and-match, and leverage the best points of multiple services quickly and easily.

“We’ve given a business person — or marketing manager in this case — the capability to build their own systems,” Hasija says. “We’ve broken all the channel logics into their atomic components, and provided a design surface so they can create business flows visually.” 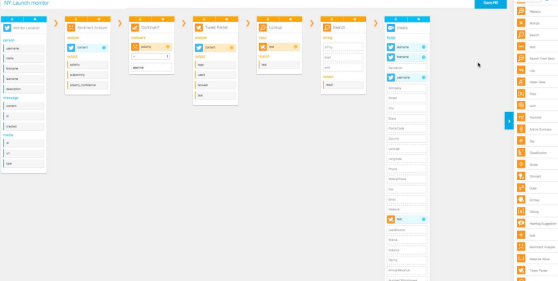 Above: A launch monitoring flow with drag-and-drop operators to pull in from the right.

The question, of course, is whether this approach will continue to hold up as the company moves beyond social and marketing and into other areas of cloud-based integration. And as enterprise clients start driving floods of data through Azuqua’s pipes.

For now the Azuqua has working web-to-lead flows and many others. As the technology becomes widely available, it will be interesting to see what users make of it.