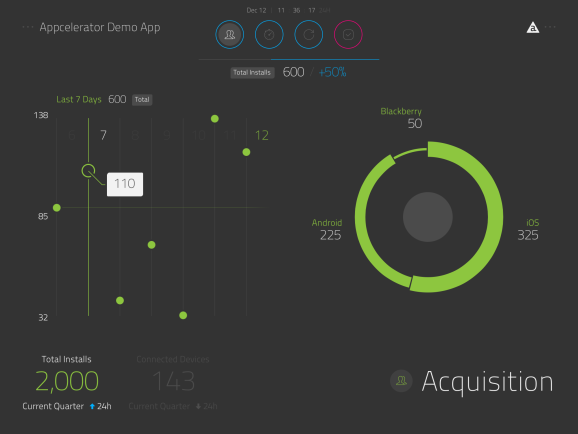 With its latest major developer platform update, Appcelerator is one step closer to its dream of becoming the next Oracle.

The company initially started out offering tools for building mobile apps, but it’s now more focused on giving developers tools to manage and analyze their apps. Today Appcelerator announced the latest version of the Appcelerator Platform, which features a slew of upgrades for developers, as well as better tools to help less tech-savvy folks make sense of their mobile app’s performance.

This time around, Appcelerator co-founder and CEO Jeff Haynie tells me, the company focused on making its Insights analytics tool understandable for non-developers. That led to a revamped user interface and a focus on five big metrics for measuring app success: acquisition, engagement, retention, quality, and conversion.

It may still take some training to use, but now people like company executives and operations workers will be able to glance at their app performance in real time without needing a developer to translate the data. You can also specify funnels of data to focus on. For example, a retail executive may be most concerned with the ratio of customers who place items in their carts to those who actually check out.

The new Insights product was developed by a small team at Appcelerator that previously focused on helping partners develop their mobile apps. But since the company decided to push app management rather than development, it spent the past year figuring out ways to make the analytics tools more user-friendly.

Today’s update also delivers some useful new tools for developers, including a new API builder that’s driven by technology from Appcelerator’s Singly acquisition last year. It will allow devs to quickly put together mobile-optimized APIs from a variety of data sources, and will hopefully lead to less time wasted on learning the intricacies of arcane APIs.

For businesses that still can’t open themselves up entirely to cloud services, Appcelerator is today finally making a private cloud product available, which can be deployed behind firewalls. That’s something the company has been promising for a few years now, though Haynie expects the number of companies who need private cloud solutions will dwindle over time. Appcelerator has been running the software from its private cloud deployment in its public cloud for several months now, so the experience between the two should be identical.