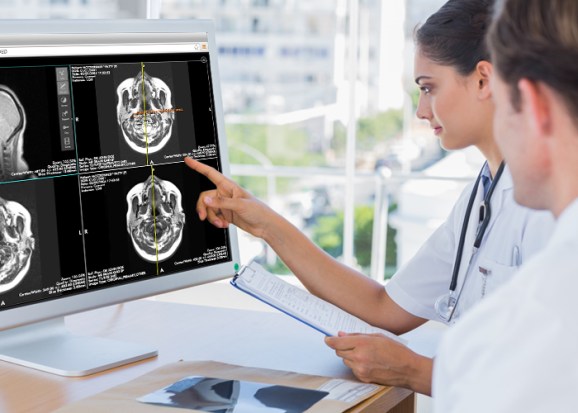 X-rays, MRIs, and CT scans often are at the center of medical diagnoses, but in digital form, they’re usually very large and hard to transmit.

An Phoenix, Arizona company called DICOM Grid has developed a cloud-based service that eases that pain, providing a way to share images among clinicians and patients without violating any HIPAA privacy laws.

The platform uses a couple of cool proprietary technologies to deliver images quickly and securely. The first is a streaming function that allows clinicians to begin viewing images while they’re still coming down from the cloud.

The second is a security feature that divorces personal or “protected health information” from the image itself while in transit. This goes a long way toward satisfying the privacy requirements of sending medical images.

Some top shelf health providers are buying into DICOM Grid’s idea. The company says its customers now include Mayo Clinic, Rush University Medical Center and dozens of other national healthcare and research organizations.

Mayo Clinic likes the technology so much it decided to invest, putting in roughly $750,000 in the $6 million funding round Dicom Grid announced today. The lead investor in the round is Canaan Partners, which put in $3.5 million. The company has now raised $30.9 million in total funding.

DICOM Grid says it will use the new funding to further develop its imaging platform and advance the system’s integration with radiology information systems and electronic health records systems.

DICOM Grid CEO Morris Panner told me the system is often used by healthcare organizations to cut down on redundant imaging within the system. For instance, he told me medical data exchange Greater Houston Healthconnect has about 130 hospitals around Houston, and uses the system to make sure that where ever a patient presents around Houston, his or her existing images will already be available. So no additional images need to be taken.

This is huge, because medical imaging is very expansive. Current estimates show that imaging is one of the fastest growing components of medical costs, making up between 7.5 percent and 10 percent of total healthcare costs. Imaging costs more than $100 billion per year, and as much as 10 percent of them are redundant or unnecessary.