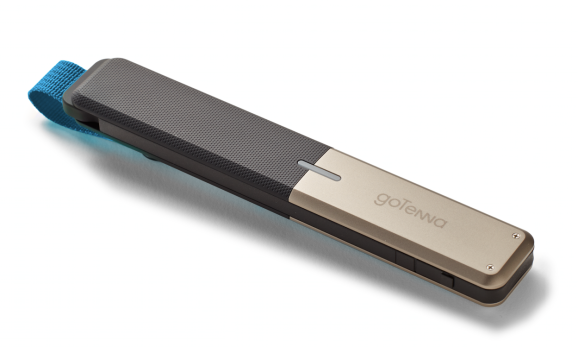 Picture this: You’re on a camping trip, up on some mountain in the middle of nowhere, and suddenly you get hurt and need to call for help. Problem is, your phone isn’t getting any service, and you’re now stranded without a way to reach anyone.

This, and many other situations in which cell service is unavailable, are what goTenna, a small gadget now available for pre-order, is trying to solve.

The idea came out of goTenna co-founder and chief executive Daniela Perdomo’s experience with Hurricane Sandy in 2012. She was astonished at how dependent we are on cell service yet how unreliable it can be in such circumstances.

“I thought it would be great if people could communicate regardless of what’s happening with connectivity,” she told VentureBeat in an interview.

“I do believe that decentralization is the future; centralized infrastructure has failures,” said Perdomo. “We really think that we’ve developed something that people use completely on their own terms.”

So what about mesh networking — the ability for phones to connect peer-to-peer using Bluetooth and their built-in radios — which apps like FireChat leverage to overcome the absence of cell service?

Well, while mesh networking is great, it has low range and requires a dense mass of phones daisy-chaining in order to reach someone beyond a few feet, Perdomo told VentureBeat.

“What people wanted was range,” she said. goTenna gives you a range of up to 50 miles, although it depends on your altitude and other factors. In a city such as New York, the realistic range is closer to one mile, for example.

And while phones could technically create mesh networking on longer ranges, the frequencies at which this would work are not allowed by the Federal Communications Commission, which telecommunication carriers are surely happy about as it would make their services unnecessary.

While goTenna seems promising and helpful, it does have a big drawback: Phones using it can only communicate with other goTenna-connected phones. Perdomo admits that it’s something people have to plan for, meaning they have to purchase it knowing they’re going somewhere with low cell service.

The company is selling them in pairs in an attempt to make the tech more useful from the get-go. If you can give the spare goTenna to your camping buddy or whomever you’d want to communicate with in low-connectivity situations, then the purchase makes sense.

The team has built a basic messaging app, which will be released when the product ships in late fall. It will also be releasing an SDK to enable other people to build apps for various use cases and situations.

goTenna was founded in 2013 by Daniela and Jorge Perdomo and is based in New York City. The company raised a $1.8 million seed round in late 2013 from investors such as Bloomberg Beta, Andreessen Horowitz, and Brooklyn Bridge Ventures.