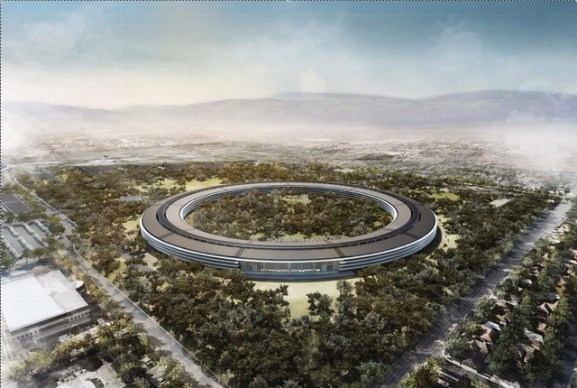 Both headquarters look like doughnuts — or, if you’re being generous, giant flying saucers.

The GCHQ is Britain’s equivalent of the U.S. NSA, and reportedly worked with the U.S. agency to siphon data from the pipes and servers of Apple, Google and Twitter, according to documents leaked by Edward Snowden.

NSA and GCHQ are best friends — ever since NSA was created by President Harry Truman in 1948.

Above: GCHQ headquarters in England

Is there a meaning behind the similarity of these designs? Who knows. Apple did not return emails for comment. GCHQ was closed when I wrote this brief dispatch.

British architect Chris Johnson designed the GCHQ building, which locals refer to as “The Doughnut.”

Apple has taken some mild heat from residents near the build site, like this individual who lamented on a Cupertino City website recently:

“If Apple wants to create a gigantic campus, it needs to provide the parking space as well. Sunnyvale residents living around the campus should not have to deal with the parking, traffic, congestion and noise that come with all this. It’s like having a neighbor who throws loud, crowded parties every day.”

But Apple has also launched a public relations outreach program to keep neighbors up to speed on the construction and apologizing for any inconvenience. A computer engineer who lives near Apple Campus 2 told VentureBeat that Apple’s sensitivity has been appreciated.

The Apple’s “flying spaceship,” known officially as Apple Campus 2, is an engineering marvel. By the time’s it completed, it will encompass 2.8 million square feet of circular beauty, big enough for the over 14,000 employees who will work there. It will be surrounded by trees, lots of them.

The resemblance between the two designs is striking. Sir Norman Foster, architect extraordinaire, himself a British national, designed Apple Campus 2 in close conjunction with Steve Jobs, who died after losing a tough fight with pancreatic cancer in 2011.

Those interested in keeping tabs on Apple Campus 2 can do so here. Construction is due to be completed in 2016.