When it comes to anonymous social network Secret, social media marketing’s approach has been business as usual: Leap first to be first, consider the ramifications and things like strategy later. How else do you explain Gap’s awkward first foray? 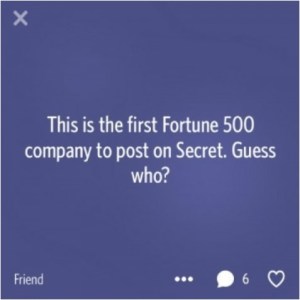 Secret is a six-month-old app that lets you share what you ordinarily would never want to share, completely and utterly anonymously. You can share your secrets in secret, with your friends, and with strangers. It builds a social network around the telephone numbers in your phonebook and has no registration process other than providing your phone number without your name attached (Secret is working on a Facebook login in an attempt to widen its accessibility).

Like so many apps before it, Secret saw buzz develop when some of its Valley-centric secrets saw traction before bleeding over into the blogosphere. It has just been valued at over $100 million, so we are to presume it’s not going anywhere soon. The newest round of funding ($25 million in July) and publicity only make the app a bigger target waiting to be exploited by social marketers who want to be first to play with the shiny new toy.

The Gap example shows how brands are putting being first before any consideration of a long-term strategy, let alone their audience (if there even is one). When social marketers so obviously pander to a razor fine sub-segment of knowing, tail-chasing users, we ignore our very reason for being.

More importantly is the question of whether we should even bother to try with Secret. Social does not always beget a marketing opportunity. Case in point: 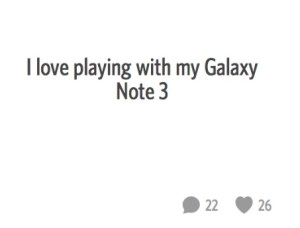 Was this plug for the Galaxy Note 3 a ham-fisted attempt at viral marketing or merely a misguided non-secret secret from an ardent user? Impossible to categorically say, unless the brand voluntarily comes forth a la Gap, and it’s a reality that raises two distinct problems for any brand and its participation on Secret:

1. If you have to officially acknowledge yourself so as to give credence to the messaging, you are missing the point completely. It’s Secret, that’s the point. If a brand must announce who is speaking with the subtlety of the Hunger Games cannon fire as a precursor to every ‘secret,’ then it goes beyond awkward; it becomes obtuse.  Maintaining anonymity is key for any social media marketer on Secret, and it’s a fundamental that may prove easier said than done – what are we without self-affirmation and our Cannes Lions?

2. If you do openly participate, you leave your brand open to impersonation and misinformation. That is to say, if a particular brand openly declares participation on Secret, they become a target for others to hijack that presence and imitate them (which is very easy to do since each and every post is anonymous). Openly declaring participation only gives credence to every crank and impostor from that point forward.

So how should brands use Secret? The means and the method must be unique; it has to be approached completely differently to any other form of social media marketing. A brand, as a company, as an entity, must take Secret to its natural and foregone conclusion. As a vehicle of a well-timed and creative controlled leak, Secret could become the perfect conduit for a brand to control the messaging without appearing to do so. And because of that appearance of organic impartiality, the weight of that messaging is that much heavier. All of a sudden, Secret becomes a way for brands to leak directly to the public for the first time, cutting out the middleman and retaining plausible deniability.

Leaks on Secret – real or inadvertent – build traction before going beyond the social app straight into the arms of the traditional press. The Guardian was just one of a phalanx of classic press outlets and blogs that picked up that Apple’s next gen earbuds were apparently going to track heart rate and blood pressure. While the rumor has since been debunked, Apple clocked a few hundred million organic social impressions (and potential customer feedback) in the process. Job done.

Social is a unique marketing medium in which the marketer is constantly chasing the audience, who continually flit from app to platform to channel. FOMO, the digital land rush and the opportunity to be first to grab mindshare means this mentality will always be with us. Yet there must be a better way to approach new opportunities, tactically and strategically, so that the brand isn’t exposed and the brand’s audience isn’t left high and dry when we inevitably move onto the Next Big Thing without any regard for the community we have built around ourselves. Let’s give our audience the respect it deserves.