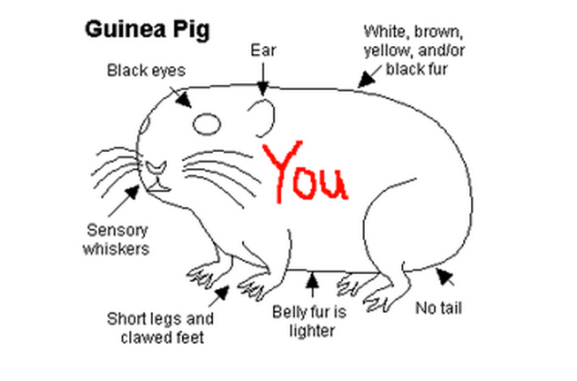 OkCupid is doubling down on a controversial blog post, where it openly admitted to experimenting on users. Monday, in a blog post titled “We Experiment On Human Beings,” the dating site openly admitted to randomly pairing up users with less-than-perfect matches to see if beauty and good advertising mattered more for getting a date than the personality expressed in the profiles.

Well, after causing a front-page ruckus about the ethics of large-scale experimentation, OkCupid emailed out a picture today (above) of a literal guinea pig with a giant red “You” stamped on the front.

“Our blog is back with a new post, the first one in three years. It covers a few of the interesting experiments we’ve put our users through since we started OkCupid. Maybe you were one?”

Personally, I find the transparency refreshing. As I’ve written about before, Facebook’s own experiments have yielded some potentially life-saving findings. The problem with Facebook was the secrecy. OkCupid is out in the open about their policies.

Moreover, i think it’s impossible to not experiment on users. Every design decision on every single part of a website is really just a hypothesis about how a feature will impact user behavior. An “experiment” just means that the product team is bothering to measure the impact of their decision.

The same effect of OkCupid’s recently published experiment could easily have been duplicated if they chose to put more effort on highlighting profile images and less on the content of the profile itself. Instead, the data-driven team decided to measure what happens when one is prioritized over the other.

That said, big companies generally prefer to minimize controversy in the press. But, maybe OkCupid believes that all news is good news. We’ll find out soon enough.