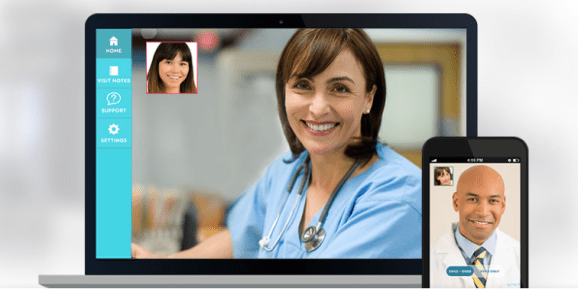 Doctor on Demand, a technology platform that enables “video visits” between doctors and patients, is finding some traction in 2014.

The San Francisco-based company announced today that it has raised $21 million in new funding. Venrock led the round, while Shasta Ventures and celebrity investor Sir Richard Branson also participated.

The company will use the new funds to expand its service, increase its employee count, and expand its network of 1,400 participating physicians. It will also add new bells and whistles to its core service.

Doctor on Demand physicians can diagnose and write prescriptions. During the video house call, the patient is presented with an e-perscription interface with which she selects her pharmacy. The interface also shows where the pharmacy is located on a map.

Once that’s done, the doctor sends the e-prescription to the pharmacy via an inter-pharmacy computer network called Surescripts, which was built by major pharmacy chains and now connects about 96 percent of the nation’s pharmacies, Jackson says.

The treatment plan is also made available to the patient on the Doctor on Demand mobile or desktop app.

Importantly, Doctor on Demand can be used to send important aftercare information and notifications to the patient. If the doctor puts the patient on a three-day regimen of antibiotics, for example, the physician might tell the Doctor on Demand system to send a note after three days asking the patient if he feels better. If not, the system might prompt the patient to book a new appointment, Jackson explains.

Doctor on Demand is unique in its space in that it doesn’t charge a per-member per-month fee to client companies, Jackson points out. Rather, the companies pay only when their employees use the service.

Comcast hopes that video doctor visits will keep employees healthier and cut down on the company’s healthcare costs. “We are always looking at new ways to offer our employees the highest quality care at an affordable cost,” said Comcast/NBC Universal VP of global benefits Shawn Leavitt in a statement. “Inconvenient and expensive urgent care visits are common choices for health treatment because employees often don’t know where else to go for everyday care.”

And now a short statement from Sir Richard Branson!

“I invested in Doctor On Demand because I believe that mobile technology will improve the system for patients, providers, employers, and insurers,” Branson said. “It will enable a more efficient utilization of resources and a reduction in the overall cost of healthcare provision.”

Doctor on Demand is now available in 46 states.