Check-ins are out. Recommendations are in. The new Foursquare is finally here.

Today Foursquare relaunched its self-titled app and marked the end of a confusing, yet inevitable transition which saw the company split its location sharing and business discovery features into two separate services.

If you’re into check-ins, Foursquare’s Swarm app, which launched in May, is for you. If you want to find the best pizza in Brooklyn, you may want to give Foursquare’s new namesake app a try; it’ll be available on iOS and Android later today.

From the start, Foursquare’s transition was painful to watch. Although investors undoubtedly called for changes as the New York startup’s monetization efforts floundered, many existing users quickly lashed back. In the App Store, for example, recent reviews are so bad it’s as if a competitor’s marketing team was hired to write them. Colorful comments include: “hero to zero,” “messed with the best, will die,” and “give me back control, you f***ers.”

And yet, Foursquare had to change to survive. In the original Foursquare app — let’s call it Foursquare classic — monetization attempts proved unnatural. The company’s ad retargeting experiments in 2013, for example, were criticized by some in the tech industry.

Going forward, Foursquare took hints from Twitter and made the service far more brand-friendly. Where companies once awkwardly coexisted alongside a group of your closest friends, now a public follower model makes the whole thing feel less invasive. 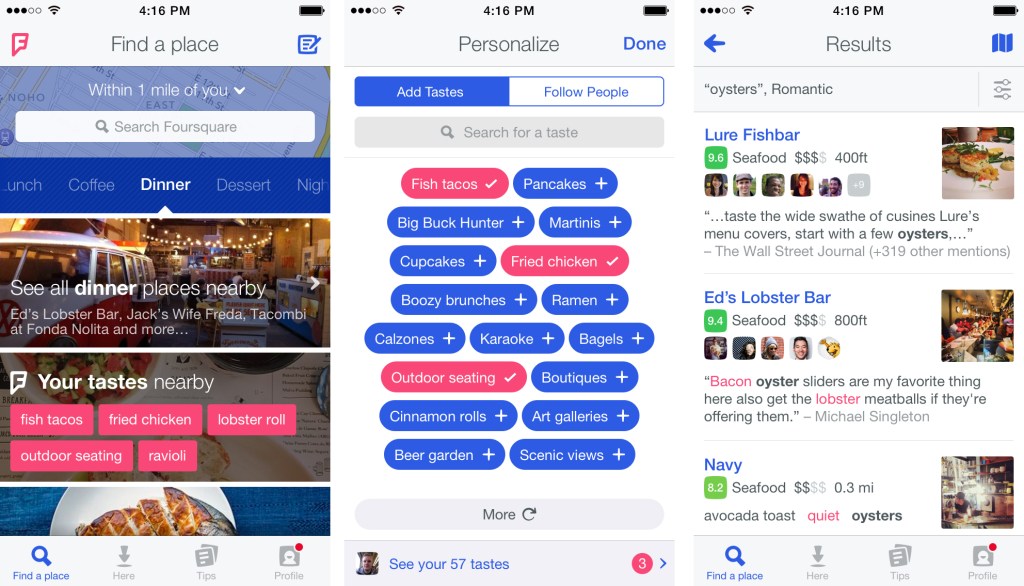 According to Foursquare vice president of product management Noah Weiss, Foursquare historically “had a friendship model. The new Foursquare is all about great recommendations,” Weiss explains, “and there you care more about the people who’s tastes that you trust. The new Foursquare has a follow model. In the future, it’s easy to follow experts and brands.”

Listening to Weiss, the new Foursquare sounds quite like a cross between Twitter and Yelp. More, from Weiss:

Because it’s all based on followers and it’s really based on “do you have tips that other people trust” it’s actually perfectly built for brands, and a lot of local publishers, and even celebrities that have tastes you might trust.

But, according to Weiss, Foursquare doesn’t have its own blue check mark for verified accounts. Instead, the company wants Foursquare users to build clout (note: clout with a “c,” not a “k.”) by leaving ratings and tips. With these actions, power users can build “expertise” and gain followers without having to share sensitive location data outside of their circle of friends. Again, that’s what Swarm is for now.

Foursquare’s new pitch is simple: the self-titled app “learns what you like and leads you to places you’ll love.” The app now serves up custom recommendations based on the places you go (the app passively tracks this), the people and companies you follow, and your “taste,” a new feature which enables users to manually tell Foursquare their personal preferences with tags, like “great atmosphere,” “hipster,” or “spicy.”

Back in March, Foursquare chief Dennis Crowley aggressively declared that Google and Yelp are “incredibly broken.” Weiss put the comparison more delicately in a call with VentureBeat yesterday: “If all of our tastes are different, then why should we all get the same search results?”

Even in its official announcement blog post, Foursquare took a not-so-subtle shot at Yelp: “There’s no reason why we should all get the same recommendations when looking for a place to eat, drink or shop. Getting a one-size-fits-all list of places may have been innovative in 2006, but it feels downright antiquated now.”

Foursquare’s argument against Yelp is pretty convincing, too. It’s easier to trust recommendations and ratings from friends and experts than it is to skim through a list of random reviews.

Going forward, Foursquare’s role is finally clear. You can use Foursquare when you’re hungry and want to find the best restaurant nearby. And if you still like to check-in, you can use Swarm. If you don’t like the change, you’re out of luck.