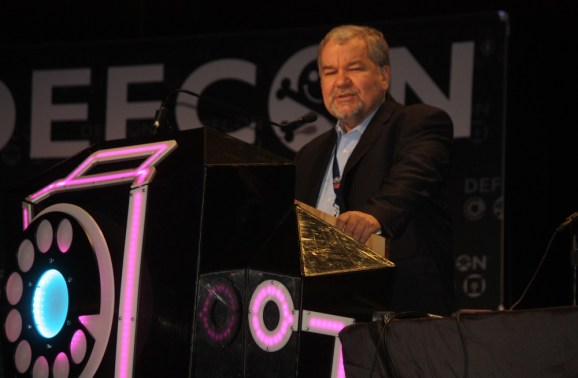 LAS VEGAS — Phil Zimmermann made his name as an advocate for privacy in the 1990s when he defended the right to use encryption in his Pretty Good Privacy protocol to prevent widespread eavesdropping.

Now, in the wake of Edward Snowden’s revelations of wiretapping by the National Security Agency, he is doing the same with his startup Silent Circle, which enables people to make phone calls that no one (or no group) can tap. His first customer is KPN, a Dutch mobile and landline carrier that wants people to be able to talk on the phone without a fear of wiretaps.

“We are seeing a tectonic shift because of Snowden’s revelations,” he said, speaking at the Defcon hacker conference in Las Vegas. “Everybody in the security industry is upping their game. Our whole reason to exist at Silent Circle is security. The time has come where we have the wind at our backs with market pressure.”

Zimmerman is also working on the Blackphone, which uses the PrivatOS secure operating system and ensures private phone calls. The system uses encryption and the ability to detect eavesdropping.

Back in 2013, Zimmermann coined a “law” that held that the natural flow of technology tends to move in the direction of making surveillance easier, and the capability of computers to track us doubles every 18 months.

While the Snowden news was troubling, Zimmermann said, “Hopelessness has a kind of paralyzing effect. There were many times in history where we face hopeless situations that couldn’t be changed and yet we did. Slavery was one of those. There was also a time when we had a nuclear arms race. That seemed like something we couldn’t change. And yet, the arms race came to an end.

“If I ever meet Snowden, I’ll have to thank him for waking everyone up.”

Zimmermann created PGP in 1991, and it has become the most widely used email encryption software in the world. That sparked a battle over allegations that the only people who needed cryptographic software were drug dealers or terrorists. Zimmermann and other advocates marshaled resources to turn around legislation aimed at forcing backdoors into encryption software and restricting the export of it. That political experience helped him become more savvy about promoting Silent Circle to government agencies.

“If our own government develops a dependency on it, they will recognize it is counterproductive for them to try to get a backdoor on it,” he said.

Symantec bought PGP in 2010. In 2012, Zimmermann launched Silent Circle, a privately funded company with what is effectively a new secure and private version of Skype. His partners include Jon Callas, cofounder of PGP; Mike Janke; Vincent Moscaritolo; and Vic Hyder.

He created voice-over-Internet encryption protocols (VoIP) such as ZRTP and Zfone. At Silent Circle, he is using the technologies to enable carriers to deploy secure phones.

Zimmermann said he believes that the Dutch carrier KPN is brave because it is the first to change. He told an apocryphal story from the 19th century to illustrate it. A rumor claimed that tomatoes were toxic, so one person chose to eat some tomatoes in public. When he didn’t die, everybody else started to eat them.

“For 100 years, phone companies have created a culture for themselves to be cooperative with governments in invading privacy,” he said. “These companies think there is no other way. They can’t break free from that culture.”

Zimmermann cited the bravery of KPN’s chief technology officer, who will discover that “these tomatoes are not poisonous.”

Silent Circle counts the United States military as a client. A U.S. Navy SEAL came to Zimmermann, complaining that he wanted soldiers to be able to talk in a secure manner with their families. Among the customers are Special Operations teams in Canada, the United Kingdom, and Australia and the U.S. Congress.

The company now has 100 employees.