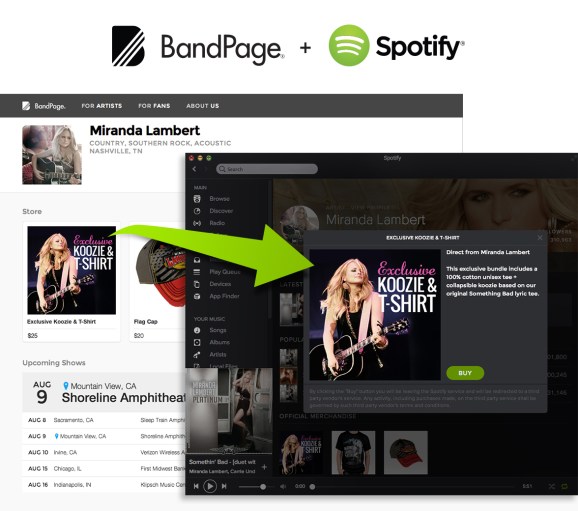 BandPage allows bands and solo music artists to easily create websites that keep their fans informed about things like tour dates and band news, and it lets artists connect their sites with other social services. It also gives those artists a way to sell merchandise, tickets to secret or VIP concerts, and more.

The new partnership integrates BandPage’s platform into Spotify, thus giving musicians a direct line into Spotify’s massive user base. And while BandPage already offered integrations with other rival music services like Rdio and Soundcloud, teaming up with industry leader Spotify is a big win because it means more business for BandPage and hopefully more revenue for artists.

“We’re looking at this as ‘commerce on Spotify 2.0’,” BandPage CEO and founder J Sider told VentureBeat. “BandPage already offers over half a million artists the opportunity for new streams of revenue, and now they have access to sell merch and band-to-fan experiences to Spotify’s 40 million users.”

Sider explained that when deals go up on BandPage, they are already available across lots of other music services, such as Shazam, Rhapsody, YouTube, and others. Adding Spotify to the mix will likely increase revenue for bands, but BandPage also wants to be able to show artists what’s making money and why its successful, he said.

The deal also makes sense for Spotify, which has taken a lot of heat over the last year for not being able to pay artists enough money — especially lesser known musicians represented by smaller record labels. The company first addressed this by rolling out a new strategy that focused more on artists, which included a partnership with monetization and audience engagement service TopSpin.

However, since TopSpin is part of Beats and Beats is now owned by Apple, the BandPage integration presumably makes more sense.

Hell, if this partnership proves successful, we might even see Spotify scoop up the startup to add to its arsenal in the same way it did with the purchase of leading third-party music data startup The Echo Nest.