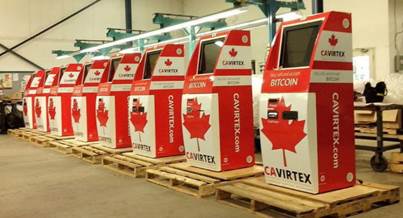 Let’s say you’ve always been curious about crypto-currencies like Bitcoin, but the idea of creating an account online and dealing with a Bitcoin exchange doesn’t thrill you (though why this could be we’re not sure)?

Until now, you’ve had no other options. Will your local bank or financial institution do it for you? Probably not.

But the future for buying Bitcoins without the online aspect (at least in Toronto) is looking a little brighter, thanks to CAVIRTEX (pronounced, somewhat unintuitively as see-eh-vir-tex), a Calgary-based startup and Canada’s first Bitcoin exchange. Today, CAVIRTEX is launching a network of 6 new Bitcoin “BTMs” (as opposed to ATMs) around Toronto by partnering with Gateway Newstands, an operator of small newstands most notable for having an exclusive arrangement with the Toronto Transit Commission. Yes, we are aware that the photo above shows eight BTMs — we are trying to determine where the extra two are going.

In a press release for today’s launch, CAVIRTEX explains how their new network of machines will give consumers access to buy Bitcoins with cash:

CAVIRTEX has connected the new BTMs directly to their online trading exchange to ensure users are getting the best price available. In order to buy Bitcoin instantly and in person with Canadian cash the customer only needs a cell phone that accepts text messages. You then have a choice of scanning a QR Code with a Smartphone app or you can get a paper printed wallet from the CAVIRTEX Bitcoin machine. CAVIRTEX plans to continue working with BitAccess with hopes of installing BTMs in all Gateway Newstand locations. There are currently more than 500 locations in the Gateway Newstand network.

According to Sarah Jesson, a spokesperson for CAVIRTEX, Gateway locations that have these machines are already seeing an increase in customer traffic, which might explain the real reason the company agreed to partner with CAVIRTEX.

The machines were developed by another Canadian startup, Ottawa-based BitAccess. BitAccess is on something of a roll these days; the company now has its BTMs in 47 cities across 12 countries, according to the release.

CAVIRTEX claims that today’s launch makes “Canada the global leader in BTM accessibility” and that “Toronto now has more BTMs than anywhere else on the planet.”

Exciting stuff if you live in or plan to visit HogTown and want to quickly convert some of your cold, hard cash into Bitcoins.

Update, February 19, 2015: Well that party didn’t last long. After a suspected hack, Cavirtex is reportedly shutting down its operations and presumably that means its network of Bitcoin ATMs too. Perhaps it will relaunch under a new name: Caveat Emptor.