Recognize these incredible sales statistics that have been popping up all over LinkedIn, Twitter, and on the sites and blogs of marketing technologists?

These stats come courtesy of the National Sales Executive Association, and are usually shown as an image with the source confidently displayed in the bottom-right corner. 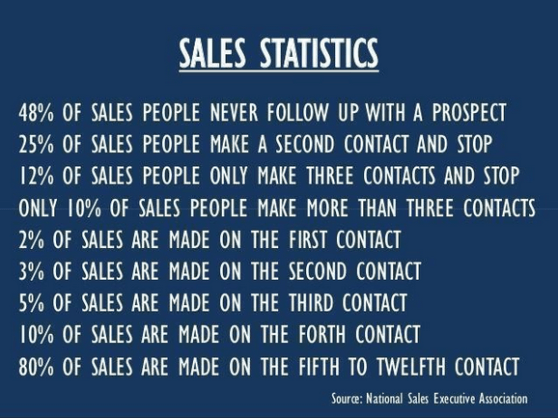 Truly mind-blowing, aren’t they? And not just because the creator of the graphic can’t spell “fourth.”

They’re suggesting that in a team of 10 salespeople, only one of them is getting past the third follow-up call. That also means that for the other nine staff, it’ll take 180 sales cycles before they’re likely to win one deal each!

But before you put on your size 10 boots to go kick your sales team into action, there’s something you should know: These stats are completely made up, and the National Sales Executive Association doesn’t exist.

Googling the organization or its acronym (NSEA) bears no related fruit at all. The closest we get is the National Association of Sales Professionals. If it had changed its name at some point from National Sales Executive Association, it would say that on its History of NASP page, right? It doesn’t.

The Council of Better Business Bureaus also shows no trace of the group. I used the IRS website’s search tools to see if I could find the organization, but still came up empty. I also searched the relevant organization and company registers in other countries in case this is an international organization. Again, no results.

Indeed, if there ever was an organization of this name, it has either wiped its entire footprint from the web or they existed at a time before the Internet started cataloging everything, which would make the validity of the data sketchy at best — things have moved on a little in business since the 1980s.

How did I discover this? I nearly used these statements myself about six months ago when writing an article about sales and selling. You’ll be astounded to know that it took me approximately five entire minutes to discover that the data was bogus. However, I kept seeing the very same data being quoted elsewhere, so I started keeping track of it. 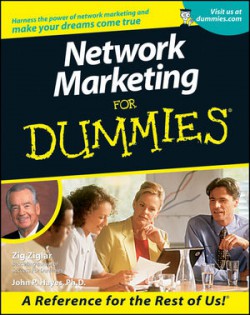 In the last half year, I’ve made a list of more than 300 people quoting or sharing the NSEA stats in their blog posts, articles, presentations, speeches, and even books.

Yes, these amazing stats have found their way into the pages of “Network Marketing For Dummies”, authored in part by the late, great Zig Ziglar. I have a lot of respect for Zig, so I feel particularly sad that the bogus information can be found in print with his name attached to it.

Not only that, but you’ll find these amazing statistics quoted in blogs and articles at organizations in sales leaderships positions, such as Salesforce, Microsoft, and more. There are several sites with a PageRank of over 7/10, such as Examiner, quoting data from an organization that doesn’t even exist.

I have details of speeches where the keynote speaker has used the information to make a point. I can show you Slideshare files that perpetuate the myth. There are sales associations that discuss the stats in forums.

I can even share with you this recent World Cup-themed infographic (PDF file), promoted by the brilliant SalesLoft, that is based entirely on the false information provided in a study that doesn’t exist. 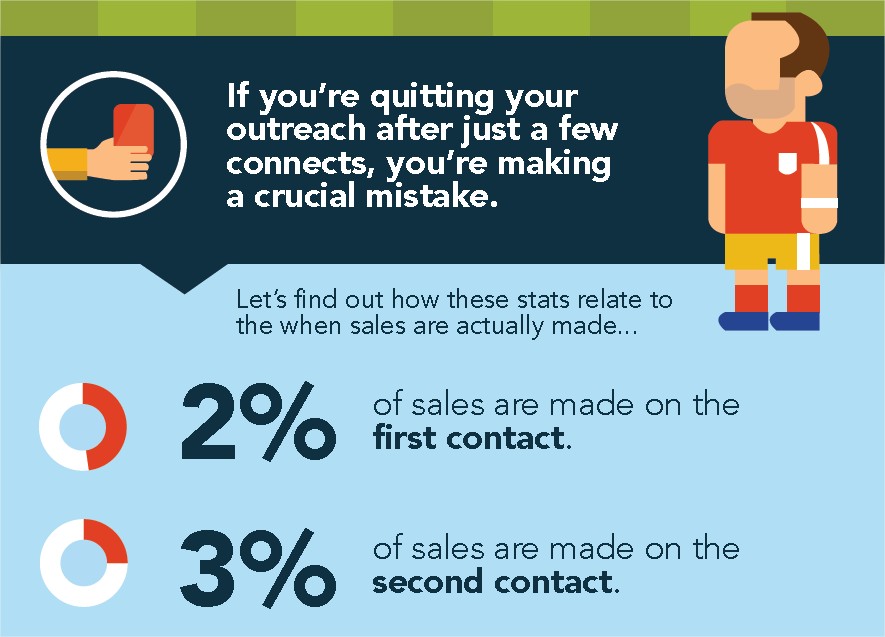 Some of the articles I’ve read that quote these numbers do so because they have a product to sell. These people are unlikely to check their sources because they really don’t care if they’re true or not. The people behind the ‘Super-Awesome Follow-up System’ (name changed as I don’t want to give them airtime) just want to tell you what life is going to be like without giving them $69 per month, regardless of the facts.

Others I was more shocked about. I know and respect a lot of the people and companies that are using these sales statistics to highlight their point, and I have no doubt that some small business owners have made changes in their companies after reading them.

Think about those ramifications for a moment. Entrepreneurs, owners, proprietors, and managers potentially steering their company in a new direction as a result of fake information. It makes me shudder.

Thankfully, I’ve seen some of people challenging the authors in their comments section, but they are few and far between.

Of the 300+ references to this report I’ve seen on the Internet, only two of them explain the facts about these bogus stats. Kudos to those bloggers for discovering the truth — I doff my digital cap to you by linking to your own mythbusting material on this topic.

Of course, one of the reasons memes like this do so well is because they’re:

Remember, it took me five whole minutes to realize they were neither real nor came from a reputable source of studies, analysis and reports. The moral; always check your sources, regardless of how official or mind-blowing the information may be.