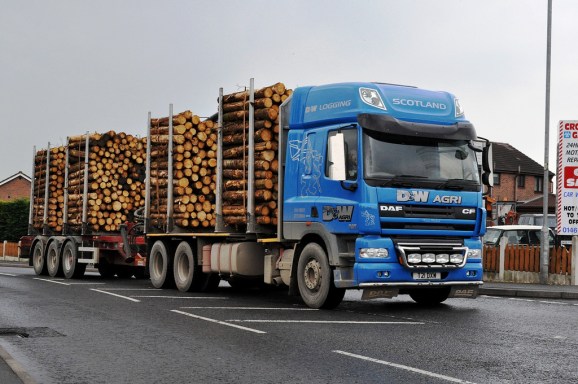 Giant eighteen-wheelers are intimidating on the road as it is. Think of how scary they’ll become when they no longer have drivers.

The U.K. is considering a trial run of automated cargo trucks that travel in packs as soon as next year, the Sunday Times is reporting.

However, the Department of Transportation is saying “No decision has been reached on a trial using this new technology,” according to the BBC.

The technology connects a convoy of trucks together via Wi-Fi, and infrared cameras and laser sensors prevent vehicles from driving into one another. Each vehicle would still have to have a driver physically present, but only the driver in the leading vehicle would control movements.

Theoretically, drivers in rear vehicles would be able to do administrative work, read, or take lunch, the report says.

There are concerns that a band of connected trucks would cause traffic problems, though a dedicated traffic lane may solve that particular problem. Still, questions remain about the safety of autonomous vehicles.

In June, the U.K.’s Minister of State for Universities and Science, Dave Willetts, told the Daily Mail that he’s making autonomous vehicles a priority; not just helping to create the vehicles, but also preparing the Department of Transport for their eventuality.

Google has been the most outspoken proponent and developer of self-driving cars. The company unveiled its most recent prototype in May: a stripped down smart car with no steering wheel or pedals.

But Google’s enthusiasm for autonomous cars is catching on. This year a number of similar projects have come out of the woodwork, including murmurings of an autopilot function on Tesla cars.