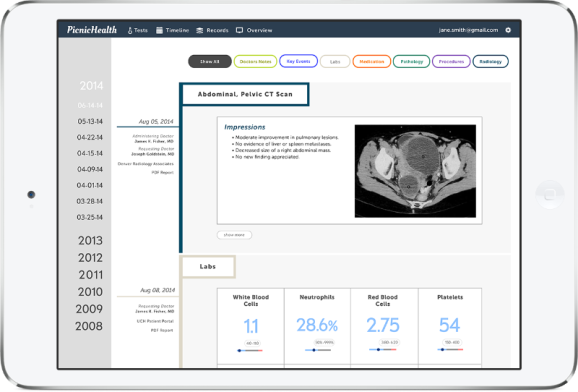 As part of the Meaningful Use requirements in the HITECH Act, health care providers are now required to give patients access to a specified set of patient data. Providers will have to build patient portals at their websites containing the data, accessed through the so-called “blue button” on the home page.

That was good news for San Francisco-based health startup Picnic Health, which is in the business of collecting and organizing personal health records on its customers’ behalf.

Picnic Health was in the most recent batch of startups in the influential Valley accelerator Y Combinator. Y Combinator invests $125,000 in each company in the class.

To get the process rolling, a consumer signs up for the service, then signs a HIPAA release allowing Picnic to access their patient records data.

In some cases, part of the patient record data sits in some other health providers’ database, or the data is in paper form. Picnic can track down the missing data and pull it into a customer’s patient health record (PHR). It even has automated systems — web-based faxing and optical character recognition (OCR) — for digitizing paper-based health record data.

But healthy people don’t think much about their patient records. Chronically ill people do.

Of the chronically ill, Picnic Health believes, cancer patients have the greatest need to have their patient records organized, and they often have the hardest time doing it.

And, as Picnic Health founder and CEO Noga Leviner points out, the burden of collecting all of the data usually falls on patients alone. This can be an extremely daunting task, especially for people aren’t feeling well.

Leviner says Picnic Health is now working with several oncologists to further focus its product on the needs of cancer patients and their doctors. “We’re seeing a clear need,” Leviner.

Oncologists stand to benefit greatly from a unified, digitized, and searchable personal health record. Many patients come for treatment with very little patient information. At the other extreme, some cancer patients come to the oncologist with reams of paper that electronic health records systems spat out. So doctors often have to swim through a lot of useless printouts to get to the information they need.

“Oncologists say the best patients are the ones with binders,” Leviner says. By this they mean the patients who have done the hard work of collecting their medical records in one place — a paper binder. But no matter how well-organized, the information in these binders isn’t searchable.

Picnic Health is simply doing what most startups must do, in any industry: It’s finding the place in the market where its product would be most valuable, and tweaking its product accordingly. Doing this in a smart, agile way can mean the difference between survival and kaput for startups.

Leviner says that though her company is focusing on oncologists, the service will remain available to anyone who wants to stay on top of their medical data.

People who want to collect and organize all available patient records on a one-off basis can do so for $295. For people who want Picnic to collect their records and add any newly generated records to the PHR, an ongoing $40 per month plan is available.