Two days ago, Product Hunt, one of the buzziest communities in recent times, graduated from the most highly-regarded accelerated program around, Y Combinator.

And if that’s not enough for this week, the company is announcing today that it has raised $1 million in funding and that its long-awaited iOS app is now available. Founder Ryan Hoover is having an amazing week, to say the least.

As a recap, Product Hunt is an online community that caters to the tech product fanatics. Community members can submit, vote and comment on, and generally browse daily submissions of products from the community. It’s a “Hacker News for Products,” or a “Reddit for products,” if you will.

Product Hunt has become the darling of Silicon Valley (Hoover told me that I’m not the first to call it that), garnering attention from investors, entrepreneurs, casual “makers,” reporters, and everyone in between. Even his participation in Y Combinator’s recent class was the result of encouragement from some of the program’s partners who probably saw the potential it had and wanted Hoover to apply.

So it’s really not at all shocking that Hoover has not only raised funding but that he raised pretty much all of it, except for Y Combinator’s $120,000, before he even began the three-month long program he just finished. And he has assembled a collection of name-brand investors: A-Grade Investments (Ashton Kutcher’s fund), Abdur Chowdhury, Andrew Chen, betaworks, Brenden Mulligan, Cowboy Ventures, CrunchFund, Google Ventures, Greylock Discovery Fund, Jack Altman, Ludlow Ventures, Naval Ravikant, Nir Eyal, Slow Ventures, SV Angel, Tradecraft, Vayner/RSE, and Y Combinator.

Hoover did all of that fundraising in about two weeks, and without reaching out to any of them. Yes, every single investor reached out to him or were recommended and introduced to him by another investor, Hoover told me.

Hunt products on the go

Although Product Hunt had a fairly decent mobile site for a while, its native app is essential in order to give Product Hunt an optimal mobile experience. After all, if users are going to spend time — possibly way too much time — looking at Product Hunt on their phones, they want to have the full experience.

Much like the website, the app provides a clean feed interface as well as the ability to zoom in on each product to see comments, related links, and upvotes. Overall, the app lets folks do the same things as the website, except it’s optimized for the mobile phone. 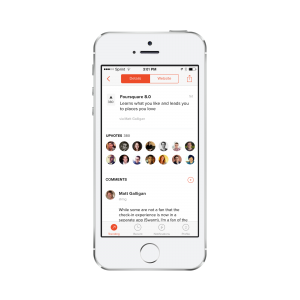 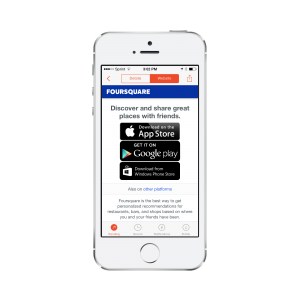 Hoover enlisted David McKinney, an Australia-based developer, to design and develop the app. And like any artist deeply attached to his work, McKinney is still not satisfied with the app as it is, although “sometimes you have to just ship,” Hoover wrote in an email.

The road to ‘Games Hunt’

During his presentation to a roomful of investors, press, and entrepreneurs at Tuesday’s YC Demo Day, Hoover announced that, eventually, he plans to take Product Hunt beyond the tech product category.

“We’re becoming influencers in the tech community … [but] I believe there are other markets that are similar to the tech market that can also benefit” from Product Hunt’s model, Hoover told me over the phone.

Hoover and his team have been experimenting with themed collections such as “retro products,” “emoji,” and so on, that they put together themselves, with the help of a few hand-selected contributors (I had the pleasure of suggesting Tamagochis for “retro products”).

But Hoover’s plan will go beyond collections — he wants to build separate communities, or sub-communities of Product Hunt, depending on the structure he settles on. These communities will also have their own set of participants, first vetted by Product Hunt’s team to ensure that they’re truly knowledgeable and passionate about the topic and will fill up the submissions on their own unlike the collections.

And in case you’re wondering, it’s absolutely no coincidence that Reddit co-founder Alexis Ohanian who’s currently a Y Combinator partner, has been a close advisor to Product Hunt and Hoover.

“Reddit is probably the closest model today that we’re taking cues from,” Hoover told me. “When you post a link in the Bitcoin sub-Reddit with all the Bitcoin nerds, they know what they’re talking about.” These Reddit sub-categories are exactly what he wants Product Hunt’s new communities to be like — topical and filled with “experts” and quality discussions and submissions.

To figure out what topic these new communities will be centered around, Hoover has been carefully looking to find natural sub-communities already forming on Product Hunt. The three criteria Hoover has decided to use in qualifying them are: an existing presence within Product Hunt, a high frequency of creation (regular releases of items in the category), and a strong self-identification and passion for the topic from the influencers.

This will still leave him with challenges, however, as a fashion category would only fit the latter two criteria, yet others out there have proven time and time again that it’s a lucrative community to build. Hoover added that he could still work his way up to a fashion community by starting out with an art-related one and eventually building up enough overlapping participation to add fashion.

And while Hoover didn’t mention which particular community he’ll be developing next, my personal (and non-existent) money is on games. During our conversation, Hoover mentioned “Games Hunt” multiple times as an example (sure, “example”), and I’ve witnessed first hand the power of gaming communities as an employee of a publication whose sister outlet is basically a community for gaming news.