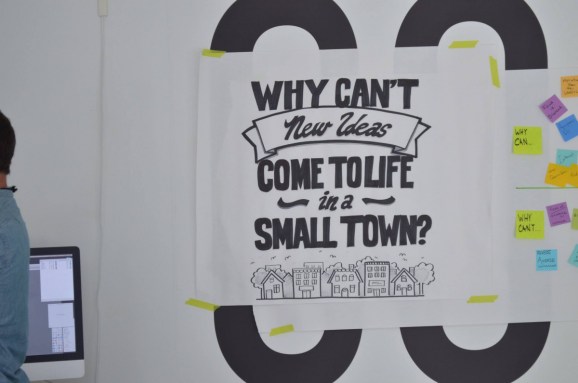 This time last year, Michigan-based accelerator Coolhouse Labs was graduating its five first startups after a summer of experiments and lessons.

Now after living and working together in what can be best described as “summer camp for startups,” a second, slightly larger group of budding entrepreneurs presented to a room of investors in Harbor Springs, Mich. this Thursday.

We first met Coolhouse Labs back in March as the accelerator was gearing up for its second batch of tech startups. The brainchild of twenty-something year old Jordan Breighner, Coolhouse Labs was born on a mission to help his local economy and to prevent young people from fleeing Northern Michigan, as they have in the past.

In exchange for 6 percent equity, the accelerator provides participating startups with $25,000 in funding, housing for the summer, as well as valuable product development resources and guidance.

Since Coolhouse Labs has just finished its second session, VentureBeat caught up with Breighner to talk about this year’s changes, lessons, and to meet the new startups.

“Because of our [remote] location, one thing we can really provide is like, top design resources,” Breighner told me.

Unlike Y Combinator, 500 Startups, Techstars, or any of the accelerators located in major tech hubs like Silicon Valley or New York City, Coolhouse Labs is located in Michigan, far from investors. Typically, location is a big selling point for other accelerators that promise rooms filled with name-brand investors and frequent networking during the programs. (As it happens, the Coolhouse startups will present next week to investors, this time in Chicago.)

But the Coolhouse Labs team had an epiphany following its first class of graduates as to how to differentiate the program from others: Build a talented product design team to help, guide, and mentor its young startups in a very hands-on approach. If its startups don’t come from an area rich in technical talent, Coolhouse Labs can help them with design and prototyping, which are just as important in today’s market as the original idea.

“We take a very active role in the companies. Part of what we see in the marketplace is that capital means less and less to these startups,” Breighner said.

“If you look at where our companies come from, they’re not from Michigan. They came here because they wanted access to our product development talent.”

So in a way, Coolhouse Labs is much more like an incubator than an accelerator, helping startups go from a young idea and a minimum viable product to a clear business plan with a polished product that’s ready for the real market.

The accelerator also became choosier in its selection of companies this year. Although Coolhouse has a bigger support staff, Breighner and his team had to pass on “a lot of interesting companies that [they] love, but would do better at other accelerators.” Out of about 200 applicants, Coolhouse Labs accepted only eight.

“The companies are a lot further along than last year. The level of talent and the level of sophistication is much higher,” said Breighner. Moreover, the team focused a lot more on selecting startups that fit Coolhouse Labs’ mission of nurturing companies that can truly help their community and local small businesses, Breighner told me.

Indeed, after skimming the list of this year’s companies, I amused Breighner by telling him that the startups seemed to provide services “that people in Michigan would use,” as opposed to the web development tools, photo-sharing app clones, and Bitcoin infrastructure startups we often see at other accelerators.

And while some such programs often expand to multiple sessions per year once they’ve tested the waters, Coolhouse Labs plans to stick to just one. Michigan’s weather, as Breighner pointed out, doesn’t really allow for more than one comfortable program.

Outdoors.io is a marketplace that connects outdoors enthusiasts with gear to spare, with folks looking to go on an outdoors adventure. Enthusiasts can make a little extra money by renting out their spare gear (Airbnb style), and renters can get gear from friendly locals who might even share some tips with them. Outdoors.io is currently most active in Denver, Colo.

BlueMed takes care of the entire patient check-in process by putting the doctor’s office clipboard on the iPad. Along with being HIPAA compliant, the app integrates into existing EMR software and can even plug into FDA-approved devices for measuring patient vitals, eliminating the need for office staff to do so. BlueMed was started by three medical school students from Toronto, who built their entire app while at Coolhouse this summer with help from Coolhouse’s technical talent.

Cotalented is a marketplace that connects startups with top recruiting services. Companies submit the positions they need filled, and recruiters bid on helping them with the recruiting. The idea is to provide companies access to more options beyond the same recruiters they always work with.

Fountain Greetings is a service that sends handwritten cards on the customers’ behalf. Customers submit their orders online, and Foutain Greetings takes care of the rest. The company sells both individual customers, as well as to companies who’d like to send cards that have a human touch. During the summer, the company launched the corporate part of its business.

LeaseMaid is an online service that takes care of the lease closing process for landlords and property management services. LeaseMaid handles tenant screenings, lease and disclosure generating, rent collection, and repairs management. The service is mostly focused on properties with 500 to 600 residents and those with high turnover such as college towns.

LocalFu is a marketplace that lets travelers request itineraries from locals for only $5. Travelers pick out a local that shares their interests, explain their itinerary needs (family, pets, important landmarks, etc.), and receive their custom itinerary. Many of the locals are avid travel bloggers anyways, so this is a very easy way for them to make some extra cash, Breighner said.

Rex helps pet owners easily find local veterinarians, compare prices for procedures, and book appointments right from the app. The company first piloted its app in Houston with only comparison charts of prices and saw a 20 percent increase in veterinarian visits as a result. It’s since added more features and capabilities such as appointment booking from the app itself.

Pressed is an app that helps you build habits. Somewhere between Lift and Timeful, Pressed uses data and algorithms to help you fill out your schedule with tasks you’d like to accomplish, while also providing guidance and motivation to create routines and accomplish goals. Pressed is not presenting at Demo Day, choosing to hold off until it’s ready to face potential investors.