In 2013, a crowdfunded project known as the Tile became a smash hit, racking up over $2,500,000 in funding from nearly 50,000 backers. The secret to its success? Simple: The Tile promised to help users locate any object attached to the coin-sized Bluetooth-connected tag priced at $20.

I signed on as a backer mostly out of curiosity. After all, compared to some crowdfunded tech projects like the Pebble, the 3Doodler or the Micro 3D printer, the $20 Tile seemed like a no-brainer.

So I committed my cash and then, just like thousands of others, I began a very long wait for my Tile to arrive. I had almost given up hope of ever seeing a Tile in the flesh when finally — nearly a year after having backed the project — my Tile showed up last week.

“So far we’ve delivered to over 50,000 people,” Nick Evans, Tile’s co-founder and CEO said in an interview with VentureBeat.

I guess I was lucky to be amongst the first third of buyers. Evans sympathizes with those who feel the wait has been too long, “I’ve pre-ordered items too and there can be a lot of frustration, like, where is this thing? We’re working as hard as we can to get everyone’s Tiles to them.” 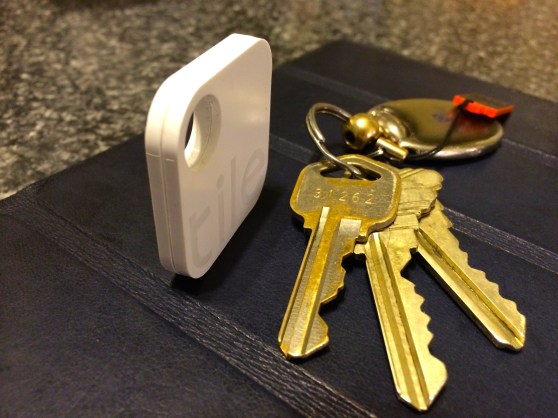 Above: The Tile, seen beside a set of typical house keys.

My neighbor ordered a Tile at the same time I did and his showed up the same day as mine. “It’s a lot bigger than I expected,” he said. It’s true: The Tile looks and feels a lot larger in real life than it did in the photos and videos that Tile posted to its website during the funding period.

Wondering why both my neighbor and I (and other reviewers) had the same reaction, I checked one of the ads that was — and is still — used to promote the Tile. Sure enough, the image Tile chose does an excellent job of masking the Tile’s thickness. The ad makes it appear as though the Tile is barely thicker than a coin — or a key for that matter.

The actual dimensions are 37mm x 37mm x 5.3 mm. The effect is that, when attached to a keychain, the Tile feels more like the largest object on your ring, not just another key. 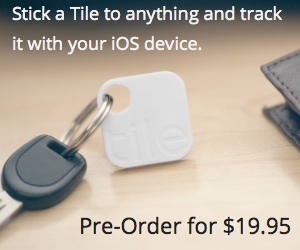 Above: If you were to judge the Tile’s dimensions purely from this ad, you’d probably think it was a lot thinner than it really is.

Evans claims there was no attempt to mislead customers and that the Tile used in these promotional images is the same size, shape and thickness as the units that have been shipped: “That’s the actual size. We of course wanted to advertise the correct size […] we didn’t want people to be disappointed,” he says.

The other issue with Tile being so big is that it’s going to seriously bulk up the profile of some objects when attached via the included adhesive patch.

The Tile’s casing is made of a glossy white plastic and, though its profile has rounded corners, the edges are quite sharp. It’s definitely tough enough to withstand being slotted through a standard metal tension-style key ring.

Getting a Tile set up is very easy. After you download the free Tile app (iOS only, for now), enable Bluetooth and location services, and register for a free Tile account, the app prompts you to add your first Tile.

To do so, simply press and hold on the “e” portion of the “tile” word on the Tile until the Tile emits a little tune and hold the Tile close to your iOS device when prompted to do so. Your Tile is now paired. You can add up to 8 Tiles per account.

The Tile app will always show you the last place it “saw” (i.e., where it was in direct Bluetooth contact with) your Tile and how long ago it saw it.

To locate your missing Tile, start by going to that last known location. Once there, tap the Tile from your list to bring up the Find screen.

If a grey circle surrounds your Tile, it means your Tile is still out of the approximate 150 feet of Bluetooth range.

Once you’re within range, the circle will switch to green. You can now tap on the Find button, which tells the Tile to start emitting a digital tune. It’s not especially loud, so unless you’re indoors, with very few competing sounds, you probably won’t hear it until you’re almost on top of it. I found that when I was outside, with the Tile in my jeans pocket, I was only barely able to hear it.


This is what the Tile sounds like when you tap the Find button. Kind of. Maybe if you held it up to your ear. This was recorded with the Tile placed 2 inches from my iPhone’s mic.

What isn’t immediately obvious is that you can tap the Tile icon in the app to see a real-time signal-strength indicator, which can help you get close enough to the Tile to hear it. If only one segment of the circle is lit, you’re at the outer edge of the Tile’s range. The segments fill in one by one until you’re within the Tile’s maximum signal strength radius (about 5-8 feet). Evans says that the decision to “hide” the signal strength indicator was intentional: “It can be a little confusing for users who are not too advanced,” he says. 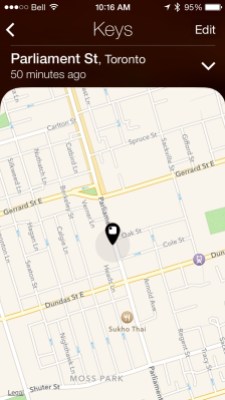 Above: I gave my Tile to my neighbor to take with him to work. My Tile app was able to locate it perfectly.

So what happens when your Tile can’t be located by going back to the last place your app saw it?

Tile calls it the “Community Find” feature. Turns out, every person who keeps the Tile app open on their iOS device becomes a node in a much larger Tile network.

Were there 5 Tiles at the Starbucks this morning? Your Tile app took note of them. Your cubicle mate left their Tiled keys at their desk during lunch while you worked straight through? Your Tile app knows that too, even if you and your cube mate don’t. The same will be true for your Tiles.

If there’s a killer ingredient to the Tile, this is it: By leveraging the combined tracking power of thousands of Tile users (er, Tilers?), that paltry 150-foot Bluetooth radius is amplified many times over.

It’s the same concept that smart-bike maker Vanhawks is using to let owners of its Valour bikes keep tabs on their wheels should their bike make an unauthorized trip somewhere without its owner.

The Community Find method relies on people having the Tile app installed — and running — on their iOS device. If the app is closed, it cannot track the presence of Tiles. Evans realizes this could be an issue.

“We’re working on ways to entice people to keep [the Tile app] open,” he says. “It would be easy to do push notifications, but these can get annoying. We don’t want to annoy people.”

If you’re hoping to find your goodies, you’ll have the best chance of success if you live in New York City, San Francisco, Los Angeles, Chicago, or Houston. These, according to Nick Evans, are the top 5 cities in the world in terms of Tile ownership, though he declined to tell me exactly how many Tilers were in each location.

The other drawback to the Tile is its non-user-replaceable battery. Because Tiles are sealed, which gives them a splash-proof exterior, there’s no way to access or replace any of its innards, including the battery. Tiles are only good for one year, after which Tile will get in touch to facilitate the return of your now-dead Tile and presumably give you the option to re-up for another year for another $20.

This works out to about $1.66 per month per object tracked, on an indefinite basis. Is it worth it? I guess it depends on what you’re tracking and how often you think you might misplace it.

While it may not seem like a good use of money for something mundane like a flashlight or a portable hard drive, it’s a bargain for parents who could sew a Tile into a child’s backpack, giving them a cheap alternative to other types of tracking devices. Similarly, you could hide a Tile under the seat of your bicycle (as I plan to do) making for a very inexpensive (if not perfect) LoJack system.

The $20 Tile is a device that does exactly what it claims: It helps you locate misplaced objects using your smartphone in a way that is easy and intuitive.

For most people, even though the Tile is only effective for a year, it offers a convenient, expandable and soon — according to Evans — shareable way to track your most commonly lost articles.

If, on the other hand, you’re main purpose in using the Tile is to track a stolen object in real-time, your mileage may vary.

Because this use case only works in areas where the concentration of Tilers is sufficiently high, for now at least, most places are not going to offer you the Tile coverage needed for the Community Find method to work well enough for this.

That said, if sales of Tiles continue at their current pace, it might not be long before most urban areas possess a very strong network of users.