Machine-understanding of text is part of many marketers’ toolbox, but it is one of the more complex tools. Today, a startup called MonkeyLearn is releasing the beta version of a cloud-based artificial intelligence platform that it hopes can do for text mining what WordPress did for websites and blogs.

Users select or create a module, such as one for “Movies, Music & Games.” Web pages, documents, or emails are uploaded to the platform or direct text feeds are captured via an API.

MonkeyLearn’s algorithm extracts the key features and characterizes the supplied material as belonging to a category (say, movies) within the module. Through an API, the categorized content can be then be utilized by a web site or app. The algorithm can be customized by the user for the industry and refined by machine learning. 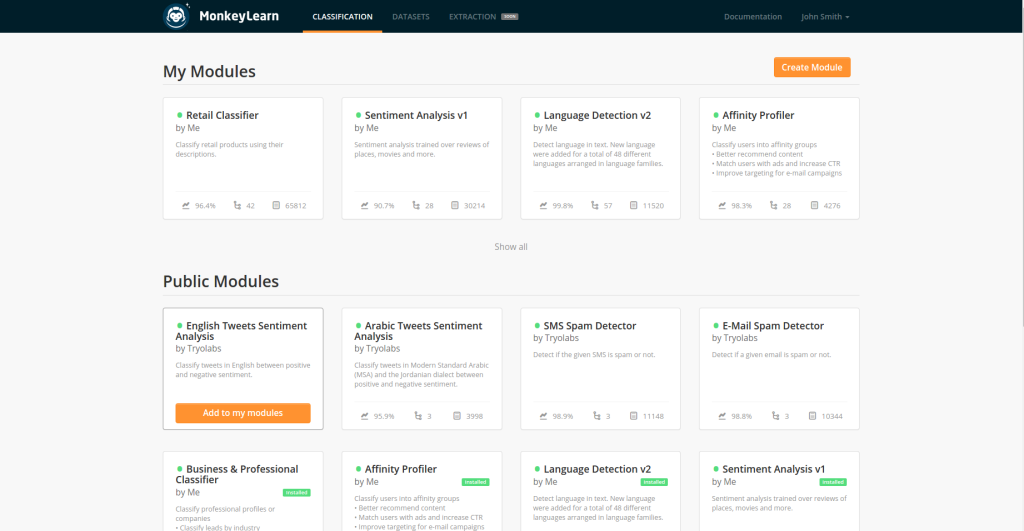 Above: MonkeyLearn modules, each containing categories

MonkeyLearn offers a number of possible use cases for this categorization: It can be employed to target appropriate ads or content by profiling webpages or users’ posts. Also, a company could conduct sentiment analysis of tweets to automatically determine if bad or good comments are being bandied about.

The tweets from people you follow on Twitter can be used to characterize your interests, creating an interest profile that can then personalize an online news publication for you. The platform can be used, Alcalá Rubí told us, “to turn any [web] page into a Flipboard,” organized by a user’s interests. (See example for VentureBeat at the top of this page.)

Obscenity or bullying can be automatically detected on social networks, or emails can be machine-sorted and sent to the appropriate department for resolution.

Beyond classification, MonkeyLearn envisions adding such capabilities as automated summarization of content so that, for instance, all posted comments on a movie could be characterized in one paragraph.

Text analytics, used by Netflix’ movie recommendation engine and similar services, is rapidly becoming a key piece of customer engagement platforms. Alcalá Rubí said that the company intends to distinguish itself from such standalone text mining competitors as AlchemyAPI and BigML through its versatility, ease of use — “It’s really easy for developers to integrate,” he told us — and by its customizability.

Or possibly by its pricing. There are no long-term contracts, and a free level allows up to 1,000 submissions or queries per month. Three other levels, topping out at $500/month for a million queries, are also offered.

MonkeyLearn, which opened an alpha version in April for 300 users, is a one-year-old spinoff of the co-founders’ five-year-old artificial intelligence company Tryolabs. To date, it has raised $250,000 from the three co-founders — Alcalá Rubí, Raúl Garreta and Ernesto Rodríguez — as well as from the Uruguay government’s ANII investment fund and from a personal investment by Eduardo Mangarelli, director of technology at Microsoft Latin America.