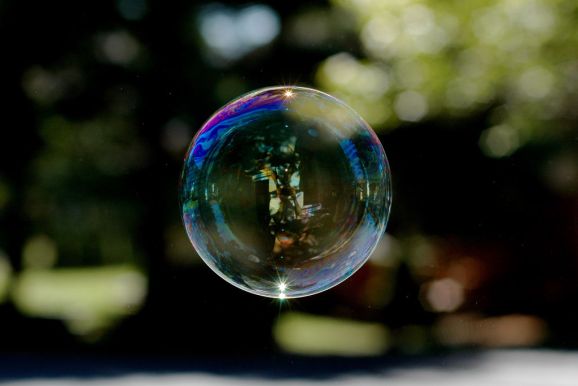 Venture capital has always been a cyclical business. Boom times are followed by busts, and the busts are inevitably (we hope) followed by new booms.

So as soon as the economy starts to look rosy, observers begin to wonder when the bubble will burst.

It’s even more tempting to shout “the bubble is bursting!” when a successful venture capitalist starts to express some doubts about the economic climate, as Benchmark partner Bill Gurley did earlier this week in a very smart, and widely quoted, Q&A with the Wall Street Journal.

The good thing about predicting that the bubble will burst is that you’re guaranteed to be correct. Just wait long enough, and eventually you’ll be able to point back to your prediction and say you were right all along.

Gurley is not doing that, however. He has two specific, related concerns: One, investors in general have taken on “an excessive amount of risk.” Second, the burn rate — the speed at which startups are burning through money — is too high, as companies throw dollars at talent acquisition, pricey San Francisco office rentals, and more.

When companies raise hundreds of millions of dollars in a round, they are either going to use that money to try and gain competitive advantage over their less well-funded competitors … or to try and keep up with others who have already raised their own small mountains of capital. That means spending more. And since most Silicon Valley companies don’t have much fixed capital (like factories and equipment), this means hiring more people.

When I ran this notion by Tim Draper in this week’s “What to Think” podcast, another investor who is lionized for his long string of successful bets — he retorted that these sounded like the words of a man who had just raised a new fund. In other words, Draper implied, Gurley has a lot of cash to invest and has an interest in scaring off other investors.

(Not every VC agrees with Gurley, by the way: The WSJ collected an array of VC responses to his article that provide instructive reading on the Valley’s mood right now.)

But Draper’s response to the current market conditions sound rather similar to Gurley’s: Both are putting their money in earlier-stage companies. With valuations so high, later-stage investments are expensive, and it’s harder to create the kind of ridiculously high returns that make VCs get up early in the morning.

By contrast, with early-stage investments, the risk is high, but so is the potential payoff. And that risk is well discounted: When you put $5 million into a Series A round for a promising but unproven company, you’re buying shares a lot cheaper than if you put the same $5 million into a Series E for a proven company about to go public. Make enough of those bets, and you can afford to write off the losers, because the rare winners are going to pay off enough to cover your losses and then some.

At least, that’s the theory.

Another thing to consider: While Gurley notes that appetite for risk is as high as it’s been since 1999, there are some significant differences between this bubble and the dot-com bubble.

For one thing, public markets are far less exposed to the risk than they were during the last boom. Fewer companies are holding IPOs, and with a few exceptions, those that do have reasonably solid financials. Facebook and Twitter are a far more solid businesses in 2014 than Netscape and Pets.com were in 1999.

For another thing, there’s less silliness to the expenditures this time around. Yes, San Francisco office real estate is insanely expensive, and companies like Twitter and Airbnb have fairly lavish headquarters. But the amount of money spent on ridiculous things like ice sculptures and Super Bowl ads seems relatively low this time around.

If the bubble bursts, it’s going to hurt here in Silicon Valley, there’s no doubt. “Silicon Valley” may event contract back to its old geographic confines of San Jose and the San Francisco Peninsula, where office space is cheap. But then, we’ve been living in a bubble here in Silicon Valley for a very long time, while the rest of the country labored through a recession that left us largely untouched.

One thing is for sure: The VC business is cyclical. There’s no question that the bubble, if you can call it that, will burst.

Saying when it will burst is the only really useful prediction. But that prediction, alas, is much harder to make.