Updated at 2:15 p.m. PST with more information from Flipboard about the current app listing in the Windows Phone store. Updated at 4:04 p.m. with a statement from Flipboard.

Apparently the company decided to add a listing in the Windows Phone store last week, and previously wasn’t allowing anyone to install it, according to a tweet from Flipboard. As of today, however, some are reporting that they have been able to install the app, which still has a few bugs that haven’t been fixed.

@Sokreter This is not the official release. That was an early, incomplete build staged on the store as a placeholder. We may have removed it

A Windows Phone app for Flipboard was first announced nearly a year ago, meaning people have been waiting for it for a while now. Flipboard tells VentureBeat a final version is coming soon, and offered the following explanation for the current incomplete version:

We have been working with the team at Microsoft to launch on the new phones, including the Lumia 830 and other high-end phones. We had staged Flipboard in the Windows Phone store in preparation for the launch, but had wanted to fix a few bugs before officially releasing. That said, we do expect to officially be live in the Windows Store and announce Flipboard for Windows Phones very soon. The placeholder lets us test the app as we prepare for an upcoming launch as well as fix some bugs of the preloaded version of Flipboard.

One big thing to note about this version is that it doesn’t contain the ability to navigate through articles and pages by “flipping,” which is strange considering that Flipboard is named after that particular “flip” UX effect.

Instead of flipping, Flipboard for Windows Phone app just slides the full page over to reveal the following page — sort of like when you’re browsing photos on your smartphone.(Thankfully, Flipboard did not feel compelled to rename the app “Slideboard.”) Other than the lack of flipping, the app contains nearly all the other features available on Flipboard for Android and iOS. But since we now know that the current version of the app is incomplete, it’s possible that the “flipping” effect will return.

Check out the gallery of images below for a closer look at the Flipboard’s Windows Phone app, and let us know if you were able to download it in the comment section. 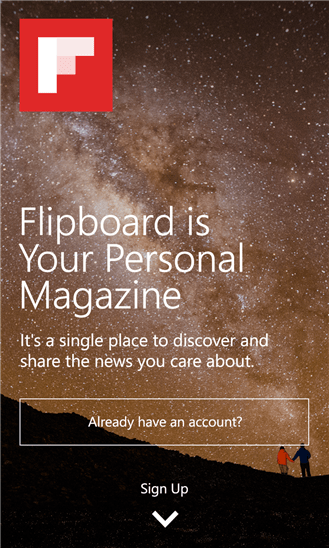