Google Glass went from a fantastical stab at the future to a running joke so quickly that it’s practically killed enthusiasm for smartglasses. But Epson isn’t giving up on the idea just yet.

The company best known for its printers and projectors has been developing its own smartglasses, the Moverio line, for the past few years. They’re clunkier and even dorkier looking than Google Glass at first glance. But after testing out the latest model, the $700 Moverio BT200, for a few weeks, I have a feeling Epson is onto something.

The big difference between Epson’s and Google’s smartglass attempts is in their philosophical approach. Google wants you to wear Glass all the time to perform much of what you can already do with your smartphone. Epson, on the other hand, is positioning its smartglasses as something you’d wear for specific tasks, such as working with architectural plans or piloting an airplane. (Note that Google Glass developers are also finding that smartglasses work well for specific tasks, such as performing surgery.)

That may not sound as wildly ambitious as what Google is doing, but it’s a shift that allows the Moverio to be far more focused and practical. Basically, Epson’s Moverio has a point, while Google Glass, as it exists today, does not. 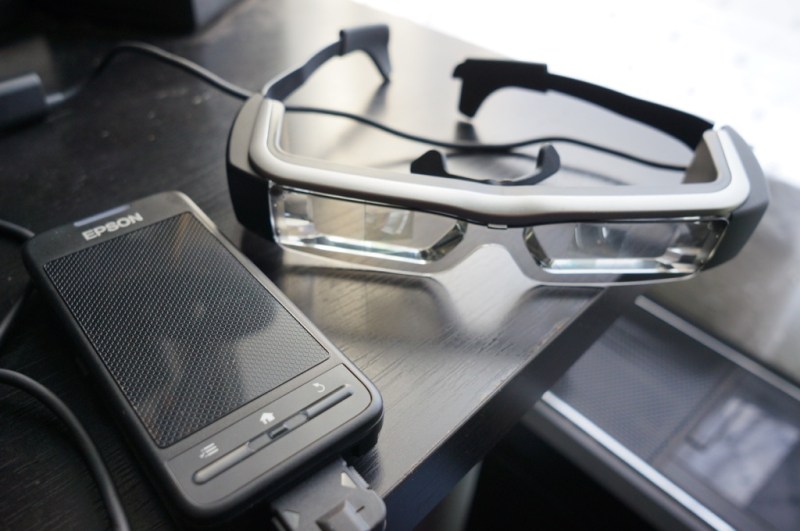 Perhaps it’s my focus on pragmatic technology that makes me like the Moverio — because there’s certainly a lot working against it.

The glasses are huge, resembling safety goggles more than something meant for mainstream consumers. They rely on a separate Android-powered touch controller module, connected to the glasses by a wire that always seems to get in the way, unlike Google Glass’s wireless and minimalist aesthetic. And did I mention they’re hilariously dorky?

Epson is clearly less concerned with style than it is with function. But that’s not necessarily a bad thing. The Moverio’s $700 price also keeps it out of the hands of most consumers — but that’s still less than half of what a Google Glass would cost you.

Once you put the Moverio on and use it for a few minutes, though, you can easily forgive its shortcomings.

Each lens of the Moverio includes a tiny projector that makes it appear as if a transparent screen is floating in front of you. It’s a screen that makes its presence known, unlike the tiny, single-eye display on Google Glass, which is meant to stay out of your direct field of vision. It’s not something you’d want to have in front of your face every day, but the dual-lens screen makes it more useful as an augmented reality tool than Google Glass. 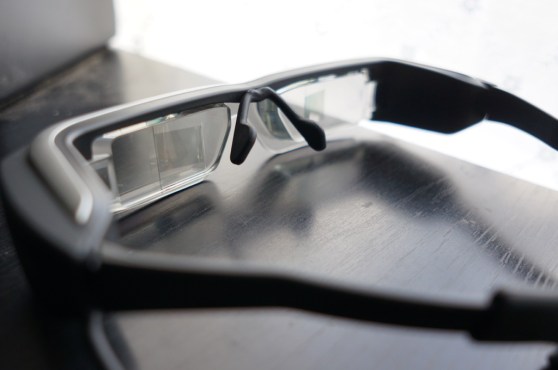 For one, the Moverio’s screen can actually overlay imagery on top of what you’re looking at. The SmartReality app from JB Knowledge, for example, can project a 3D model over a paper blueprint. You can walk around the blueprint and change your perspective on the 3D model as if it were actually in front of you. After suffering through plenty of lackluster augmented reality demos in my time, this was one of the most useful implementations I’ve ever seen.

While the Moverio runs a custom version of Android, it doesn’t give you access to Google’s full Android app store. You can move apps to the device manually via its SD card, and Epson eventually plans to offer its own app store.

There also aren’t many apps optimized for the device. Aside from the SmartReality app I mentioned, Epson included a few augmented reality games for me to test out (which are fun, but once again, make you look like a huge dork). There’s also a Netflix app, which isn’t the ideal way to view your favorite movie (but it sure is a unique way to do it).

There are also a few impressive-looking apps I wasn’t able to test out. Aero Glass, for example, gives pilots a heads-up display for plane settings and traffic lines (see a promo video above). DJI’s Phantom Vision drone app also lets you see what your drone is seeing through the Moverio glasses — typically you have to maneuver it from your spot on the ground.

Plenty of room for improvement

While it’s easy to see the potential behind the Moverio smartglasses, there’s a lot Epson will need to fix before I could readily recommend it.

For one, it’s heavy and uncomfortable to use for extended periods. It fits well enough on its own, but if I wanted a clear view of everything happening on the screen, I had to wear it over my glasses. And I have big freaking glasses. While I could balance the Moverio on my glasses for a bit, I resorted to holding them up with one hand to give my nose a break. 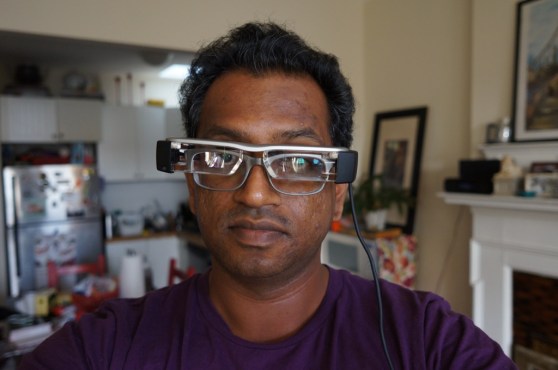 Above: Wearing the Moverio with my glasses didn’t really work out.

Seeing the Moverio’s screen clearly is also hit-or-miss depending on lighting conditions. Epson includes a few shades to place over the glasses, which gives the screens a bit more context. But in sunny weather you can forget about using the Moverio for mission-critical work.

While functional, the Moverio’s controller module could also use some touching up. It likely won’t ever be wireless — it also serves as the brains and battery for the glasses — but Epson could make it smaller and do something to make the cable less annoying.

And finally, there’s the price. Though it’s far cheaper than Google Glass, the Moverio’s $700 price relegates it to an audience of people with plenty of cash to burn. (Luckily for Epson, there’s likely a huge overlap between people who would be interested in the Moverio and people who don’t mind throwing down a few grand on a freaking drone.) 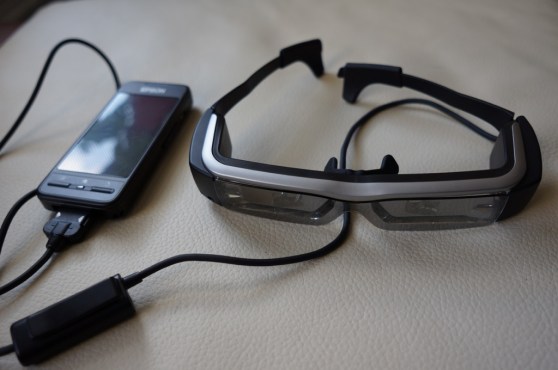 Smartglasses worth paying attention to

Hopefully, Epson will figure out a way to drive down the Moverio’s price and slim down its overall design. Epson seems to be fine with the Moverio being a relatively niche product, but it’s only a matter of time until Google or some other competitor figures out a way to make normal consumers care about smartglasses for much less.

If you’re at all intrigued by what the Moverio smartglasses can do and you can justify the $700 cost, then it may be worth giving them a shot. Everyone else should sit tight. As with smartwatches, the connected home, and just about every other newfangled gadget category, there’s still plenty that needs to be sorted out.

Google Glass may have made smartglasses a joke, but it’s fascinating that Epson, of all companies, has proven they can be useful.