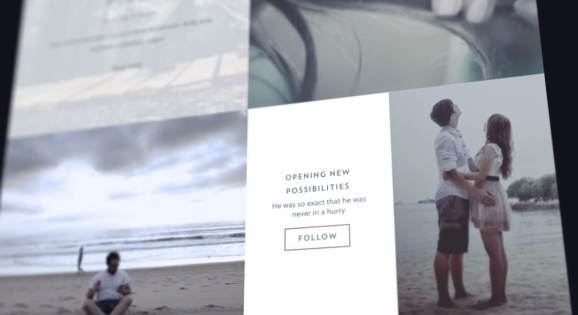 It’s one thing for Microsoft to use its computers in sophisticated ways to lay out content elegantly. Today a little startup called TheGrid is revealing a related service for automatically designing webpages using what it describes as artificial intelligence.

TheGrid, which last year raised more than $115,000 in a Kickstarter campaign, today announced that it’s running on a considerably heftier $3.1 million seed round.

Of course, website-making companies abound these days, and providers like Squarespace, which got funding of its own earlier this year, boast of pleasant out-of-the-box design templates. Exposure’s sites look great, too. But TheGrid will be able to detect faces and features in images and crop them accordingly. And it can figure out how to arrange text to maximize visibility.

Now TheGrid is revving up a crowdfunding campaign to start operating the service.

Founding members can pay $96 — or 0.27602864 of a Bitcoin — per year. The fees will cover as many as seven sites and an unlimited number of contributors once the service becomes available, starting spring 2015. A commerce engine will come later next year. TheGrid is looking to charge $25 per month, according to a statement.

TheGrid started in 2010 and is based in San Francisco.

Nick Roach, the founder of WordPress theme company Elegant Themes, participated in the round, as did Facebook vice president of product Greg Badros and former Disney Interactive president John Pleasants.