Two months after launching its “motion book” tool to the public, digital comic book startup Madefire is opening up a new pipeline to sell creator-owned work through its mobile apps for the first time today.

“This is what we’ve been working toward since day one,” Madefire cofounder and CEO Ben Wolstenholme told VentureBeat.

Madefire’s motion book tool lets you tell a story within a new digital comic format that takes full advantage of the technology available while reading on devices like desktop computers, tablets, and smartphones. The motion book format lets you to create a set of layers for the artwork on each page that can be moved, or shifted using either a mobile device’s accelerometer or an interaction with a mouse cursor when on a computer. The format also lets you add audio elements and move or change the layers of artwork on a particular page to advance the story by tapping the right side of the book.

Since launching back in 2012, Madefire has provided a slew of original motion books from top notch creators, converted thousands of licensed print comic book series from well-known publishers into motion books, and even started selling the regular print versions within its online store. When you combine the growing number of comics available for purchase with the departure of rival ComiXology from selling books within its iOS and Android apps, it has translated to a steady boost in sales that has pushed Madefire to the top of Apple’s most popular book apps for the last 10 weeks, according to the company. But the one thing missing has been sales of creator-owned work, until now.

As part of its partnership with deviantART, Madefire has added a new sales deviantART “channel” into all of its online stores where people can now sell the work they’ve created with the motion book tool or buy motion books they find interesting. Pricing starts at $0.99 and ultimately is determined by each individual creator. Also, the process of getting a book into the deviantART channel isn’t very difficult.

“It takes a team at deviantART about five minutes to get your book on Madefire, and as far as I know, ComiXology Submit’s estimated time frame for approval is months,” Wolstenholme said of rival comic book platform ComiXology’s creator-owned submission program. “I also have been very surprised by what I’ve seen coming into our store from deviantART creators. It’s a very broad range [of graphic fiction].”

Wolstenholme said he’s seen a pretty wide variety of stories in the creator-owned books: traditional comics, interactively illustrated poetry, and even tutorials on how to use the motion book tool more efficiently. 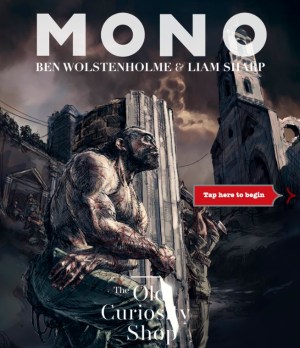 Above: The first chapter of motion book Mono: The Old Curiosity Shop by Madefire founders Ben Wolstenholme and Liam Sharp.

But perhaps the startup’s biggest hit since launching the motion book tool came from Polish deviantART users Anna Podeworna and  Kate Redesiuk. Wolstenholme said her motion book Milk For The Ugly has been read over 750,000 times since its release in July. Part of that could be because the artwork is both beautiful and free via Madefire’s store. But to give you some perspective, Wolstenholme said his own creator-owned motion book Mono: Old Curiosity Shop has had only a fraction of Milk’s readers.

“The one thing I have to say about deviantART is that what really makes the community special is how it nurtures its creators after putting their work out there, especially with such a broad range of opinions and artistic backgrounds,” Wolstenholme said. “That’s a scary thing to do. It’s just not easy.”

Whether the deviantART community is able to help produce more breakout hits like Milk For The Ugly  — books that people are willing to pay for — remains to be seen. Regardless, it does appear that lovers of indie, experimental graphic fiction will have plenty of interesting, original motion books to read in the months ahead. For evidence of this, check out all 25 pages of Madefire’s motion book Milk For The Ugly embedded below.