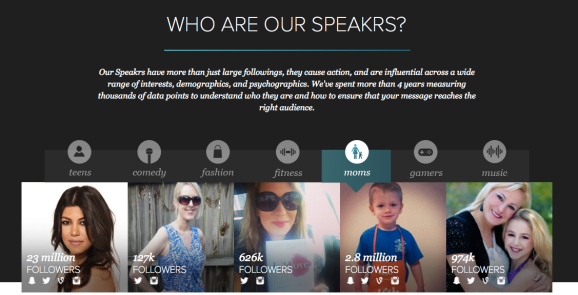 Movie and TV celebrities are so last century. Social network-based influencers are the new celebs. And LA-based Speakr — until today known as twtMob — has just landed $2.9 million in seed funding to promote more brands through these 21st century stars.

Each of these influencers has followers ranging from the tens of thousands to the millions. Their short videos, blog posts, photos, and tweets have gained huge followings for their wit, outrageousness, and engaging styles.

Take Christian Delgrosso. “He’s making a killing,” Speakr founder and CEO Marco Hansell told VentureBeat. “He can make tens of thousands of dollars a week” by sending out brand-promotion messages to his followers, each labeled in some way as an ad due to Federal Trade Commission requirements. A brand-promoting tweet through Speakr, for instance, includes the hashtag #ad.

Delgrosso conducts one of his mini-broadcast networks on Instagram, where he has amassed nearly 600,000 followers. But he’s also on Twitter, with 263,000 followers, and on Vine, with four million.

“These guys have become content creators that also have a built-in distribution vehicle,” Hansell said.

Speakr serves as a kind of ad agency for these influencers. It tracks the most popular personalities and sets up deals with many of them for campaigns, which can involve brand messages sent by 150 to 200 influencers to their zillions of followers. With about 20,000 influencers in its network, the company has conducted over a thousand campaigns for such brands as Samsung and Microsoft. Last year, Speakr said, its campaigns generated more than three billion impressions.

“Influencers,” by the way, are not brand advocates in Speakr’s terminology. An advocate “loves your brand,” Hansell said, but their posts are “somewhat white noise” because they will always talk up the brand. Influencers, on the other hand, are “category experts.” It’s the difference, for example, between BMWLover and CarExpert.

Unknown influencers can sign up to Speakr’s platform, and, after a trial period when their audience size is assessed and they have sent out test brand-messages, they are matched to a brand through such factors as the content of their previous posts. Fees, the company said, are based on a pricing algorithm “that takes into account a user’s ability to drive engagement and their audience.” Fees to influencers generally range from a few hundred to a few thousand dollars per post.

But an influencer can’t just blast out a message that says, for instance, “I love Wheaties in the morning.” The Speakr platform has suggested and required items. The campaign’s hashtag, for instance, is always required. The influencer creates the message, which might also include a photo. It is then parsed by the system for unacceptable language and gets a final review from one of Speakr’s human account managers before it sees the light of day in the network.

‘Come to us for a category’

The new funds will be “largely invested in technology,” Hansell told us. This includes expansion into Facebook and Pinterest from Speakr’s current focus on Twitter, Instagram, and Vine, with a beta of Snapchat in progress. Becoming more of a “platform-agnostic” company, he said, is the reason for the name change from twtMob to Speakr, since the firm has moved away from a focus on tweets.

The company will also be investing in additional analytical and predictive tools to better determine the value to a brand of an influencer on different platforms, for different campaigns — including offline engagements.

The competition, Hansell said, includes The Audience and Niche.

Speakr, Hansell told us, is more focused than its competitors on predicting the value to the brand of certain influencers by employing such techniques as A/B testing and machine learning. “We’re identifying the actual use [of brand messages by influencers,]” he said, “and pricing them accordingly.”

Competitors “say this is your value, more of an individual” assessment, he told us. “They’re more like a traditional endorser model, not a media model.”