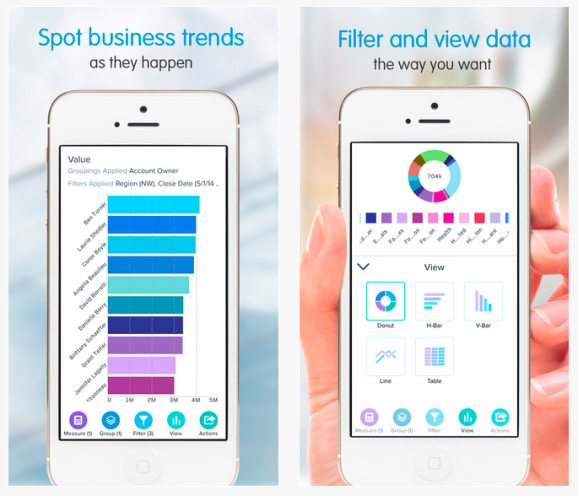 The iOS app for Salesforce Analytics

What happens to those companies who make a living in whole or in part by analyzing Salesforce data?

The CRM giant appears to be “doing what it can to avoid stepping on partners’ toes,” Pund-IT analyst Charles King told VentureBeat. Launching tomorrow, the newest cloud is “mainly aimed at delivering reports to mobile devices, to sales and marketing people in the field,” he said, and less oriented toward extensive queries.

He also noted Salesforce has said that advanced capabilities, notably including the predictive analytics that project which customers are most likely to close a deal, will still be led by Salesforce partners.

Additionally, specific partners — Dell Boomi, MuleSoft, and Informatica among them — will be involved in data integration.

Salesforce may be setting up Wave to become the leading edge in its effort to become more of a player in the enterprise, beyond its current CRM/Marketing/Sales focus. Once a company is accustomed to using Wave for some data analysis, it’s a short step to using it as a tool for other kinds of analysis — relating to, say, inventory, manufacturing, delivery logistics, whatever.

“That seems like a logical next step,” King agreed.

‘Very late in the game’

All of the vendors we spoke with — who slice-and-dice Salesforce data in various degrees — took an optimistic view of Wave’s effects on their own futures.

For instance, business intelligence provider GoodData is sanguine about the news, but thinks it will hurt others.

“We’ve been hearing about Salesforce’s attempts with cloud analytics since 2008,” GoodData CEO and founder Roman Stanek told us. “When they did the acqui-hire of EdgeSpring, it was obvious they were getting serious, but it took them a long time to bring something to market.”

“So, if anything, this announcement comes very late in the game,” he said.

“Salesforce’s new offering is primarily focused on Salesforce-originated data,” Stanek added. “We expect this offering to hurt vendors like C9, InsightSquared, Birst, and Domo due to their dependence on Salesforce data.”

By contrast, he said, GoodData does more than sales analytics — namely, “complex use cases that bring data from many different sources together [while managing] the entire data pipeline from collecting and storing the data to preparing it for analysis.”

But Birst says it’s not worried.

‘We’re in the same market’

“At the highest level, we’re in the same market” as Salesforce, Birst VP for product strategy Southard Jones told us. But what “they’re doing is different,” he added.

InsightSquared CEO Fred Shilmover doesn’t share Stanek’s pessimism about his company. He noted that Salesforce has invested in his company, and “there is an opportunity to grow the market with Salesforce.com Wave and InsightSquared together.”

And Fliptop CEO Doug Camplejohn pointed out that his company is one of the launch partners and provides “the predictive engine powering their realtime analytics.”

Even with so many cheery responses to the news, one wonders: How many analytics providers can survive when Salesforce is offering at least some — and someday maybe more — of what they do?