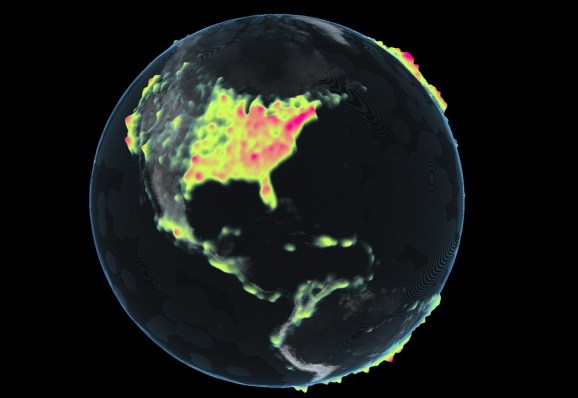 The company is hoping to disrupt the database market by building what it calls the world’s fastest big data analytics and visualization platform, which taps the parallel computing power of Nvidia’s graphics processing units (GPUs). It delivers real-time data processing with millisecond latencies across billions of rows of data, all within the memory of the GPUs. That means it lets researchers, say, monitor the spread of a disease in real time by looking at social media mentions.

Map-D has created an in-memory database that moves quickly in supporting graphics-intensive maps, charts, and other visualizations built from a massive amount of data. The company will use the money for product development. The company plans its first commercial release later this year.

Earlier this year, Map-D won $100,000 from Nvidia at the Emerging Companies Summit in March. Among the applications: enabling payment companies to more accurately flag fraudulent transactions by querying more data within a fixed time. It will work across enterprises on a wide variety of hardware platforms.

“There aren’t really any other tools on the market that allow truly interactive visualization and analytics on big data,” said Todd Mostak, cofounder of Map-D, in a statement. “Map-D can query data at a rate of terabytes per second per server, something only possible by building the fastest possible software on the fastest possible hardware, GPUs”

“Nvidia quickly recognized Map-D as a leader in the burgeoning ecosystem of big data solutions powered by GPUs,” Nvidia vice president of business development Jeff Herbst said in a statement. “We were delighted to award them the $100,000 first place prize at our Early Stage Challenge contest this past April. And we are equally excited to follow that up with an equity investment at this time.”

“We were impressed with the complexity of problems the Map-D platform could handle at amazing speeds using off-the-shelf GPUs,” said Google Ventures general partner Rich Miner. “I love it when entrepreneurs leverage technologies in unexpected ways.”

Mostak began developing the technology behind Map-D as a researcher in Middle Eastern Studies at Harvard as a way to tackle large-scale statistical analysis he was conducting on Twitter data from Egypt. He co-founded Map-D in 2013 with Thomas Graham.

Nvidia is currently looking for a dozen competitors for the Early Stage Challenge, where startups will pitch their companies in hopes of winning a $100,000 prize at the graphics chip maker’s GPU Technology Conference in March 2015.