Pop star will.i.am is launching a new tech fashion company today at the annual Salesforce conference in San Francisco. The first product, the Puls wrist device, will be released around the holiday season, but it’s part of a much larger fashion line of tech-infused clothing.

I also got a limited hands-on with his second upcoming product: a backpack with big speakers, and potential home entertainment integration.

Here’s another view of the bag: 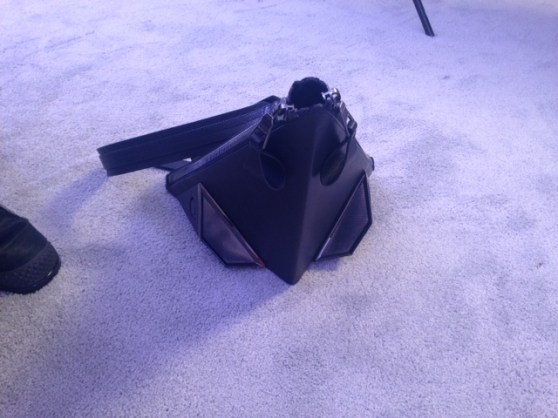 The triangular-shaped backpack has two large speakers on the outside, with sound loud enough for a party. The bottom of the bag has a wireless inductive charger, which will supposedly be able to charge devices while they are in the bag.

Additionally, will.i.am tells me that he wants the bag to have remote control. He imagines being able to stream music to the bag from either a smartphone or his new wrist device, the Puls.

His company, i.am+, has built its own proprietary artificial intelligence software, which can recognize voice commands. His backpack could someday take voice commands from anywhere in the house for music selection.

More details about the bag may come out during the next few hours and days. We’ll update you with more.