Given all of the “disruptions” in so many industries, you’d think home refinancing would have succumbed to the new wave a long time ago.

But San Francisco-based startup Lenda thinks the market is ripe, and it has just landed $1.54 million to shake things up.

Outside California — the only state where Lenda is currently operating — an online search for refinancing puts you into someone’s sales funnel, CEO and co-founder Jason van den Brand told VentureBeat.

“You end up in a lead generator,” he said, providing contact information so that brokers can call or email you. “It’s Web 1.0.”

Lenda, instead, initially takes several pieces of information, including email address, zip code, estimated home value, estimated credit score, and current mortgage, and quickly provides an estimated quote for a refinancing loan. The company says that, if the initial information is accurate, the quote should be as well.

If you’re still interested, a more complete application allows for a real-time credit check and a guaranteed quote. Van den Brand said Lenda’s rates will generally be about one-eighth to one-quarter of a point less than others on the interest and the APR, and that closing costs will be lower.

On a $405,000 refinancing loan, van den Brand sent us the following head-to-head comparison with Quicken Loans:

“I guarantee any rate we deliver [compared to] a Quicken loan,” he said. 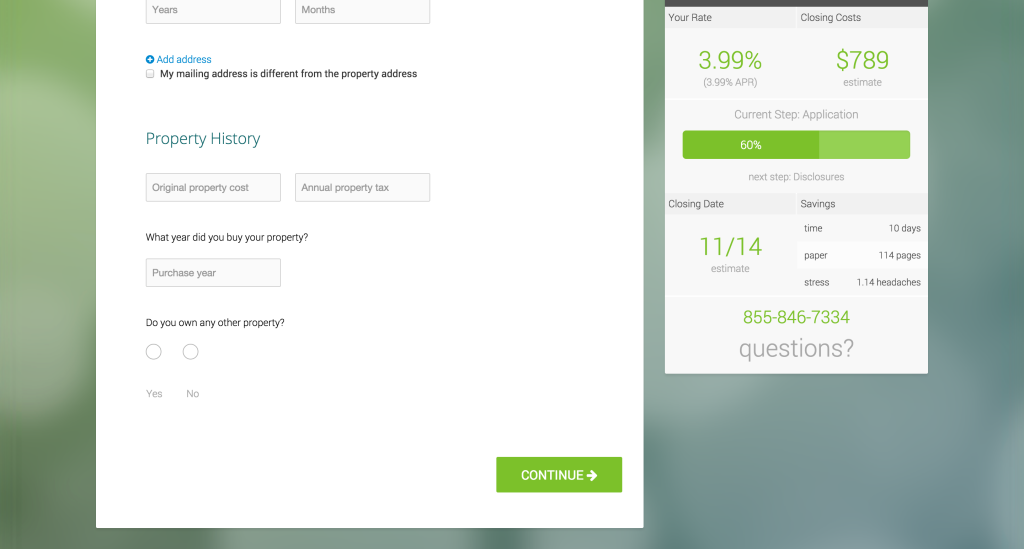 Above: A screen in Lenda

One reason the company can offer better deals, van den Brand said, is because of a classic disruptor move — removing the middleman. He noted that Quicken Loans, a product of the computer age with a long-standing, major online presence, still relies on brokers. His company is not a broker, van den Brand said, but a lender, although it works with three unnamed lending companies for the cash. He added that eliminating a broker in a direct-to-consumer model can cut out at least $8,000 on an average refinancing.

Lenda also says it can close a refinancing much faster — 21 versus 64 days, on average. But that’s not the real goal. Eventually, it wants to complete home loans in seconds. To get there, its next targets are seven days and then 48 hours.

Launched in July, the 500 Startups-graduated Lenda intends to use its new money for expansion into other states, with entries into Oregon and Washington slated for next month. The startup is already licensed in 43 states, having completed a process van den Brand described as “the DMV [Department of Motor Vehicles] on steroids.”

Given that Lenda is positioned as a disruptor, van den Brand said that “no one’s doing it just like us in the residential space.” He noted that the Lending Club provides direct personal loans online “in the same vein as us.” There are also others with similar technology, he said, but they are focused on subprime loans and “hard money” — i.e., loan sharks.