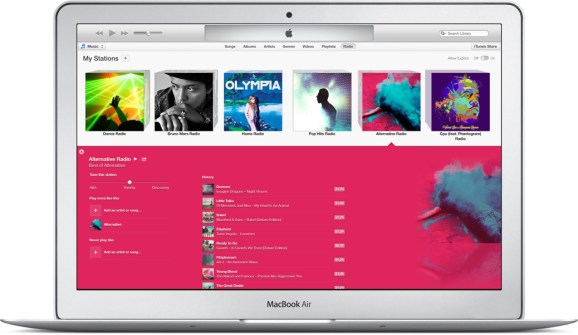 In a securities filing, Apple confirmed what just about everyone else suspected: Sales of iTunes music downloads are falling.

The admission came in the company’s annual report, filed yesterday with the U.S. Securities and Exchange Commission.

“Growth in net sales from the iTunes Store was driven by increases in revenue from app sales reflecting continued growth in the installed base of iOS devices and the expanded offerings of iOS Apps and related in-App purchases,” the company wrote. “This was partially offset by a decline in sales of digital music.”

The news is not exactly a shocker. After all, industry figures show subscription streaming services like Spotify and Pandora are growing in popularity while digital downloads are declining. The Recording Industry Association of America reported that in the U.S. sales of digital music singles and albums fell 11% and 14% respectively during the first six months of  2014.

At the same time, streaming music services saw revenue jump 28% in the first half of 2014, the RIAA said.

Naturally, people have assumed Apple was probably taking some kind of hit. Indeed, just a couple of days ago, the Wall Street Journal reported that sources had said sales of music at iTunes had fallen 13% to 14%. And earlier in the year, a Morgan Stanley analyst had claimed iTunes music sales were falling.

It was also thought that falling sales were part of the justification for why Apple paid $3 billion to acquire Beats. Though at the time the acquisition was announced, Apple danced around the question of whether iTunes music was in trouble. That didn’t stop everyone from speculating that Apple was paying big bucks to Beats’ founder Jimmy Iovine and Dr. Dre to reboot its relationship with music labels and artists.

“These guys are really unique,” Apple chief executive Cook said at the time. “It’s like finding the precise grain of sand on the beach. They’re rare and very hard to find.”

More recently, reports have indicated that Apple plans to fold the Beats Music streaming service into iTunes next year.