Few parts of the Android ecosystem have improved more and gotten less credit for it than tablets. The gap between 2010’s crude Samsung Galaxy Tab and polished products like last year’s Nexus 7 is immense. But because Apple set such a high mark early on with the iPad, merely catching up to the iPad’s user experience and surpassing it in some aspects doesn’t count for much.

Google’s new Nexus 9 hits that same wall and can’t quite get around it, thanks in part to some of Google’s own design decisions. This $399-and-up tablet is a quality instrument for creating or playing, but it doesn’t offer an overwhelming advantage over the new iPad Air 2 in any one area — not even price.

That’s not the easiest comparison for the Nexus 9 to win, but it’s the logical one. Its 8.9-inch, 2,048-by-1,536-pixel screen is not much smaller than the Air’s 9.7-in. display of the same resolution, and at .31 inches thick and .94 pounds, it’s also barely thicker and slightly lighter than Apple’s new flagship tablet.

Text and images look beautiful on that expanse of touchscreen, impact-resistant Corning Gorilla Glass, with no discernible pixels unless you peer through a photographer’s loupe. But a retina-grade display has long since become a table-stakes item.

Google also touts the 9’s 64-bit Nvidia Tegra K1, but the apps most likely to profit from those processor cycles — games — will also quickly exhaust the entry-level $399 model’s 16 gigabytes of storage. Like Apple, Google has let its priorities drift out of whack by being so stingy on the model shoppers are most likely to click into their carts.

But where the step-up option on the Air 2 involves paying $100 to jump to 64 GB, on the Nexus 9 you can only move to 32 GB for $80 extra. Making Apple’s memory-upgrade pricing look generous is no easy feat. (An upcoming 32 GB model of the Nexus 9 with LTE mobile broadband will run $599.) And unlike such rival Android tablets as Samsung’s Galaxy Tab S, the 9 doesn’t have a microSD slot to augment its own capacity.

You do at least get the Nexus 9 free of bloatware and other cruft. The Google apps included barely stray from what you’d get on a Nexus phone. The Play Store’s apps home page now features “Tablet 101” and “Tablet Spotlight” headings to ease finding tablet-optimized apps, but Android’s development frameworks don’t typically yield the sharp divide between tablet and phone apps you have in iOS. You may not see as many standout tablet releases, but phone-first apps should at least rearrange themselves a bit to account for the larger screen real estate.

A 6700 mAh battery fills much of the 9’s innards and helped yield battery life far above Google’s estimates: With the screen on all the time and Pandora Web radio playing, the 32 GB model Google loaned me lasted 11 hours and 56 minutes, almost two and a half hours beyond official active-use estimates. 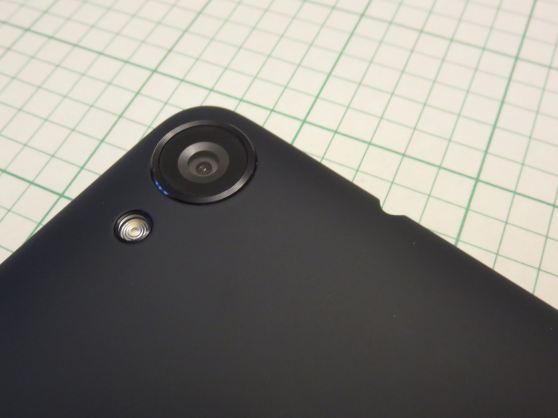 The Nexus 9’s 8-megapixel back camera includes a flash but not optical image stabilization; it can take some decent photos if you don’t let it hit every dimly-lit subject with flash — and if the subjects don’t move too much. The 1.6 MP front camera, however, won’t enhance the artistic value of anybody’s selfies.

NFC wireless comes built-in as well, although the size of this tablet makes it harder to figure out where that sensor lurks (as far as I can tell, it’s in the center of the top half of the back, above the “s” in the “nexus” logo). I was surprised to see that Qi cordless charging, a notable feature on the 2013 Nexus 7, did not make the cut this time around.

Like all other Nexus devices, the 9 ships with a stock version of Android; in this case, the new 5.0 Lollipop version. That means the 9’s storage is encrypted by default, a new battery-saver option can prolong the device’s run time by disabling much of the background activity of apps, and you can have the tablet’s screen lock disable itself when it’s in Bluetooth range of such paired devices as a desktop computer or an Android Wear watch.

And the Nexus 9 should get updates directly from Google for the next 18 months or so.

But at the end of that time, will we see a new Nexus tablet from Google? That’s hard to say, given how completely the company seems to have lost interest in 7-inch tablets between last summer and this fall and the quiet disappearance of last year’s big-screen Nexus 10 tablet. By 2016, Google’s attention could have shifted just as much.

We’ll still almost certainly have a wide variety of third-party Android tablet manufacturers, but with them you’re also looking at more deviations from standard Android and a longer wait for updates. Next to that, the predictable and sometimes boring pace of upgrades from Apple might seem a much sounder foundation for your investment.