As the months roll by, Firefox continues to lose market share. Mozilla’s browser was only down slightly in 2013, but 2014 has been rougher — and the year’s not over yet.

When we looked at the latest figures from Net Applications this past weekend, the big news was certainly that IE11 now has more users than any other browser version, finally having passed IE8. Yet we did make note of Firefox’s continued decline; Mozilla’s browser may have lost just 0.27 percentage points, but this was yet another new low in a very long time.

Here is what we pointed out about the results:

Mozilla’s Firefox hasn’t seen the 13 percent mark in years. In fact, we can’t tell you exactly how long it’s been because Net Applications’ data only goes back as far as November 2007, when Firefox still had over 15 percent market share.

To put that further into perspective, here are the last 24 months of Firefox’s market share (down over 6 percentage points): 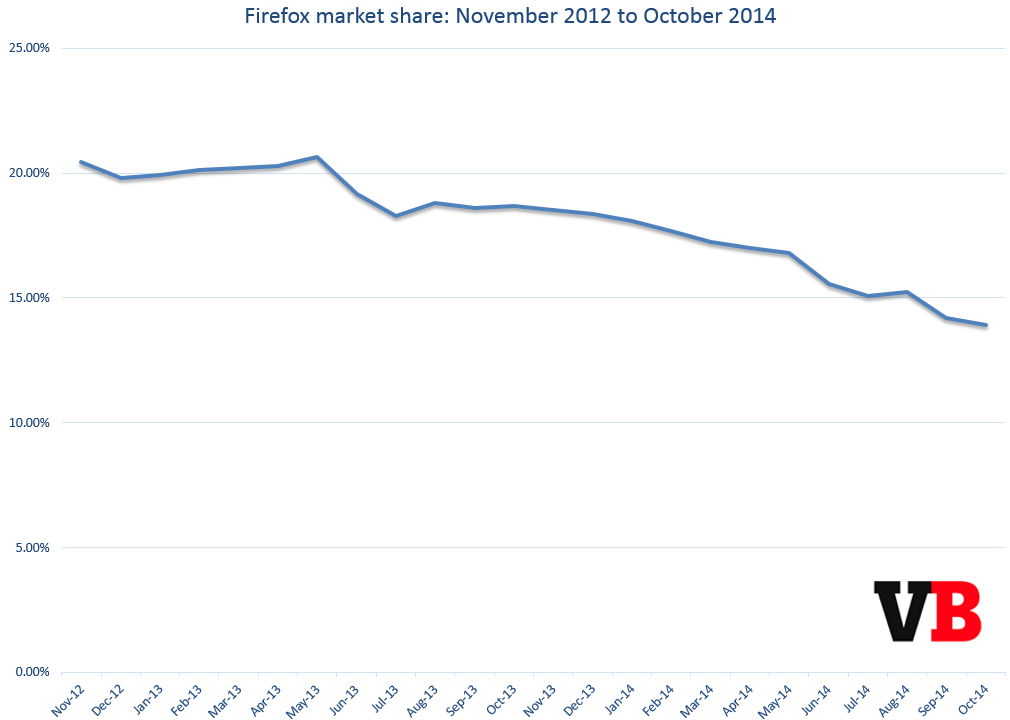 Statcounter, which measures market share in terms of usage rather than users, also notes Firefox slipping, although not as dramatically. Its data for the same time period shows a loss of about 4 percentage points and a similar downward slope.

Various browser trackers (including W3C and Wikimedia) show different figures, but they all agree on two things. First, Firefox’s rise put a serious dent into Internet Explorer all those Internet years ago. Second, Google’s Chrome is now eating Mozilla’s lunch.

What Mozilla can do

It’s difficult to decide what Mozilla’s next move should be, especially given that the most recent numbers we have show 90 percent of the company’s revenue came from Google.

Yet one thing is definitely clear: Firefox needs a big marketing push. In particular, we would argue Mozilla should focus on the browser’s privacy features.

Firefox is the only major browser that isn’t tied to a massive technology corporation. Microsoft has Internet Explorer, Google has Chrome, and Apple has Safari.

If Mozilla could tap into that fact, and use it to its advantage, many may return to Firefox. After all, the browser has come a long way this year alone, from significant performance improvements to a completely new design.

The other piece of the puzzle involves wooing developers. Just a few years ago, add-ons were built for Firefox as IE was shunned, while nowadays apps and extensions are built for Chrome. Only afterwards do some get ported to Firefox as well.

Mozilla is well aware it needs to win back this group. This is one of the reasons why, we would wager, the company is releasing a browser just for developers next week.

The browser battle is far from over, and it frankly may never be. In that same vein, Firefox has plenty of time to recover, but it needs to act.