The Department of Energy has awarded $425 million in federal funding to IBM, Nvidia, and other companies who will build two giant supercomputers many times more powerful than today’s most powerful machines.

Ernest Moniz, U.S. Secretary of Energy, announced Friday that the government will fund two high-performance computing supercomputers as part of a drive toward exascale computing, or a machine capable of one exaflop, or 10 to the 18th power floating point operations per second. Moniz said that the investments will help ensure the U.S. will have scientific, economic, and national security for future generations. The unstated goal: We must have more computing power for scientific research than other countries can marshal, because data is power.

About $325 million of the money will go toward two state-of-the-art supercomputers at the Department of Energy’s Oak Ridge and Lawrence Livermore National Laboratories. Those computers are expected to be five to seven times more powerful than today’s fastest systems in the U.S. Those systems are needed because, well, big data is getting bigger. 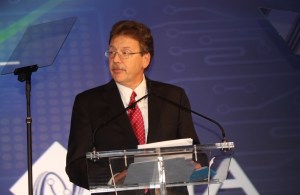 “High-performance computing is an essential component of the science and technology portfolio required to maintain U.S. competitiveness and ensure our economic and national security,” Moniz said in a statement. “DOE and its National Labs have always been at the forefront of HPC, and we expect that critical supercomputing investments like Coral and FastForward2 will again lead to transformational advancements in basic science, national defense, environmental and energy research that rely on simulations of complex physical systems and analysis of massive amounts of data.”

IBM will supply its Power architecture processors, while Nvidia will supply its Volta graphics processing units (GPUs), and Mellanox will provide interconnected technologies to wire everything together. The systems will be used for nuclear bomb simulation and deterrence, technology advancement, and scientific discovery.

John Kelly, senior vice president at IBM and director of IBM research, told VentureBeat that the new machines will put the U.S. at the top of the heap in having the world’s most powerful supercomputers. And, because of the unique architecture, which puts the processors near the data, the U.S. will likely have a lead in access to Big Data. He said that IBM refers to data as “the world’s next natural resource.”

In another announcement, the DOE and the National Nuclear Security Administration (NNSA) will create a project dubbed FastForward2 that will develop technology needed for future energy-efficient machines. Partners will include AMD, Cray, IBM, Intel, and Nvidia. The Summit system at Oak Ridge National Laboratory will deliver 150 to 300 peak petaflops, and it will be used for “open science.”

“Today’s science is tomorrow’s technology,” said Jen-Hsun Huang, CEO of Nvidia, in a statement. “Scientists are tackling massive challenges from quantum to global to galactic scales. Their work relies on increasingly more powerful supercomputers. Through the invention of GPU acceleration, we have paved the path to exascale supercomputing, giving scientists the tool for unimaginable discoveries.”

The supercomputers will be far different from the ones of the past, which relied upon thousands of microprocessors. Modern software can now take advantage of the inherent parallel processing capability of GPUs, which do the same tasks over and over, in parallel processing. So each supercomputer node is likely to have both a microprocessor and a GPU.

“Our users have the most complex scientific problems and need exceptionally powerful computers to meet national goals,” said Buddy Bland, project director of the Oak Ridge Leadership Computing Facility at Oak Ridge National Laboratory, in a statement. “The projected performance of Summit would not have been possible without the combination of these technologies, which will give our users an exceptionally powerful tool to accomplish these goals.”