Privacy-savvy folk may know Ghostery for its consumer desktop plugin that shows you which companies, merchants, and advertisers are collecting your Internet data and helps you stop them from gathering more. Now, Ghostery is unveiling an enterprise-level version of its signature app that helps businesses stop other companies from collecting user data on their sites.

The application works much the same way as the Ghostery desktop plugin. Users can see each company that is tagging a site for user data collection (Facebookm for example, puts tags on other sites to monitor browsing activity) and select which companies may collect data.

Ghostery has been able to build an impressive library of company tags by asking consumers to donate their data to its cause. It now has a library of 2,000 companies. 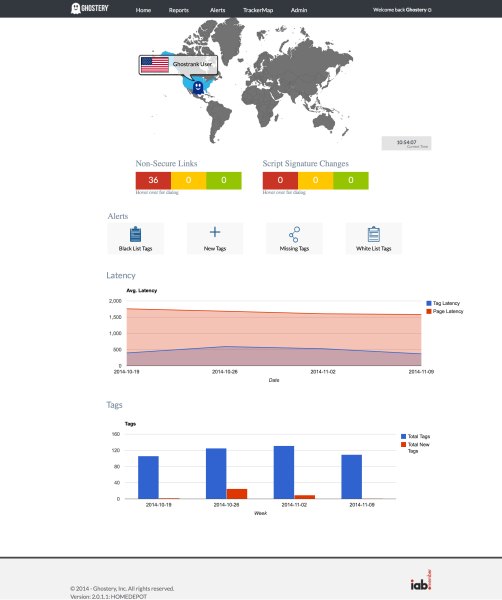 In the enterprise version of the software, businesses can not only see which companies have tags on their company website but also how they got there. For instance, let’s say Citibank is the client. The finance giant will be able to use Ghostery to see that BrightRoll has a tag on its consumer banking site, and the app will map out how that tag was added.

Businesses can also disable tags they see as problematic. For instance, some tags can slow a site down or even make it vulnerable to a “man in the middle” attack — where a hacker is able to view what the victim is doing as they do it, said Ghostery CEO Scott Meyer.

In addition to making tagging more transparent, Ghostery also monitors how tags may create holes in security and alerts companies when it spots an issue.

“We can unpack what’s the route that these guys are taking and configure alerts to see how frequently it’s happening and be specific about where all of these unsecure [tag] loads are happening,” Meyer said.