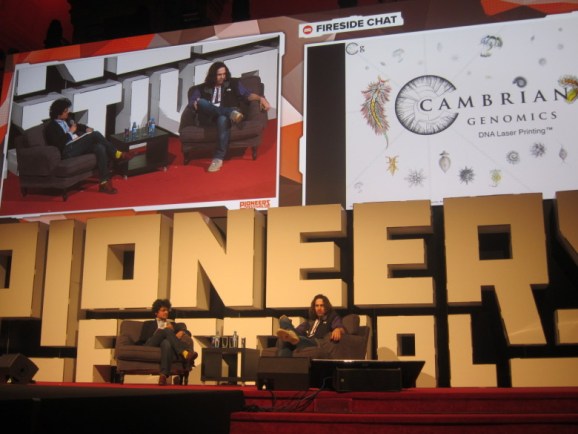 Cambrian Genomics, which has created a promising DNA-printing technology, has raised a sizable $10 million round of funding, by far the largest in the company’s history.

The funding round was described in a Securities and Exchange Commission filing Thursday. The round has a total of 127 participants, and Cambrian isn’t talking about who led the round or how much the participants contributed.

But there are some known names involved. These include Yammer co-founder Adam Pisoni, Draper Associates, and Cloudera founder Jeff Hammerbacher.

In his wry way, Cambrian founder and CEO Austen Heinz told VentureBeat his company will use the new money to “print more DNA.” But there’s more to it than that.

So far we’ve seen just the outlines of what Cambrian might do with its DNA-printing technology. Much of the discussion about the company so far has focused on the novelty factor of the company’s first DNA product, which makes plants glow in the dark.

Cambrian’s second major product isn’t so much novel as it is sensational, even controversial.

Heinz spoke yesterday at the DEMO conference about one of the companies in Cambrian’s new accelerator program. The company, called Personal Probiotics, uses Cambrian’s “Creature Creator” to print a special virus that kills off microbes in the vagina that cause yeast infections and other sexually transmitted diseases (STDs).

The product, called “Sweet Peach,” also reduces vaginal odor, which is what most in the media have seized upon, and not in a way that was very complimentary, or fair, to Cambrian. The pleasant “peach” odor is created as an indicator that it is working within the woman’s body, Heinz said.

Cambrian’s technology is already being used for far less sensitive, and perhaps more useful, use cases. The company has been doing work printing DNA for the huge pharma company Glaxo Smith Kline. It’s also in talks to formalize a similar business relationship with Roche.

Big pharma companies are asking Cambrian to print various types of DNA that can be used in the drug discovery and testing process.

Heinz says that his company also intends to print DNA for customers in the industrial chemical and agricultural industries. He says producing seeds used by consumers is in itself a million-dollar industry.

But perhaps the biggest initiative going on at Cambrian now is the development of its incubator, which supplies resources and work space to companies building products on the DNA-printing technology.

Heinz says the incubator may show more upside for his company in the future, because Cambrian can take an equity stake in them, something that would be impossible with its big pharma customers.

Cambrian isn’t the only company on earth printing the blueprint of life, but it has already filed three patents on its DNA-printing tech, two of which are currently under review.