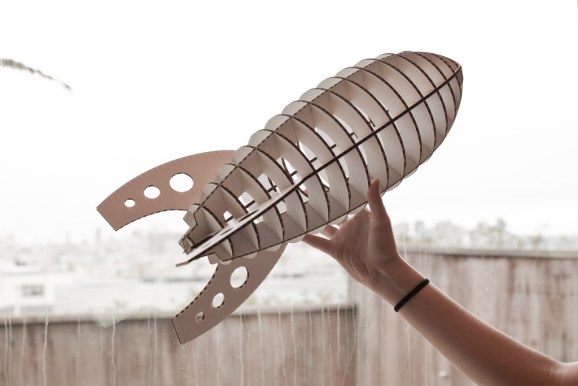 Back in 2001, when Sheryl Sandberg told Google’s then-CEO, Eric Schmidt, she wasn’t sure whether to leave politics for the undefined role she’d been offered at Google, he famously told her this:

“If you’re offered a seat on a rocket ship, get on, don’t ask what seat.”

That philosophy is still alive and well in Silicon Valley, and one rather accomplished Stanford student has quantified it. Chris Barber, a computer science major, has created a list of the top tech companies, or rocket ships, to join right now.

A couple of months ago, during Y Combinator’s startups class at Stanford, Facebook and Asana cofounder Dustin Moskovitz told students to look at the difference in the impact they can have at a large but growing company, a smaller one, or one they founded. A bigger slice of a small pie, or a smaller slice of a bigger pie?

“Dustin Moskovitz’s talk really influenced the way I thought about impact,” Barber told me in an email. “He basically says, ‘Think about it. Look at two people: employee No. 100 at Google/Facebook vs. the founder of the average angel-backed startup.'”

So Barber decided to find those promising companies. He’s named his project the Breakout List.

Looking at tech companies, with a bias toward the Bay Area and software, Barber used input from major investors he knows (“companies that they knew should or should not be on the list,” he says), as well as criteria such as valuation growth, investor tier, team quality, and, when available, revenue. Cowboy Ventures’ Eileen Lee’s list of “Unicorns” (U.S.-based software companies with valuations of $1 billion or more) served as inspiration, especially in looking at valuations.

He admits that the list is subjective and biased. Nevertheless, it’s a good starting point for engineers looking for high-growth opportunities.

Barber said he’d seen similar advice from investors Marc Andreessen and Andy Rachleff, and Sandberg herself. “It makes a ton of sense. So I’d really like to spread that,” he said.

“I believe there is a ton of value created when a talented engineer joins a breakout company. Many engineers know this too, but they have no clue where to start, what companies are growing, or where they would have the most impact,” he said.

Tracking hot companies has been a favorite pastime (and sometimes necessity) for the tech industry for quite some time. Several months ago, we wrote about the White List, a side project looking at startups’ traction in investors’ social media activity, a sort of “buzz-tracking” attempt.

There’s also Mattermark, a company that originated from a couple of lists cofounder Danielle Morrill created about VC firms. Before she knew it, Morrill and team launched Mattermark to analyze and rank as many investors and startups, in as many ways as possible, to create a data-driven understanding of them.

So it’s no surprise that just yesterday, upon Barber’s friend posting the list on tech product leaderboard Product Hunt on his behalf — Barber initially wanted to be anonymous — it caught the community’s attention very quickly. The list also landed on the Y Combinator-run forum Hacker News the day before. Techies clearly have a hunger for these efforts at analysis.

But as with everything else around here, young engineers (and others) should probably not base their major career decisions on someone else’s list. Of all the common reasons for founding, and arguably joining, a startup, “the specific passion should come first, and the startup second,” Y Combinator president Sam Altman warned his class of bright-eyed Stanford students.

Barber seems to know this. Regarding his bigger plans for the list, he stuck to this: “If you’re an engineer, keep an eye out.”