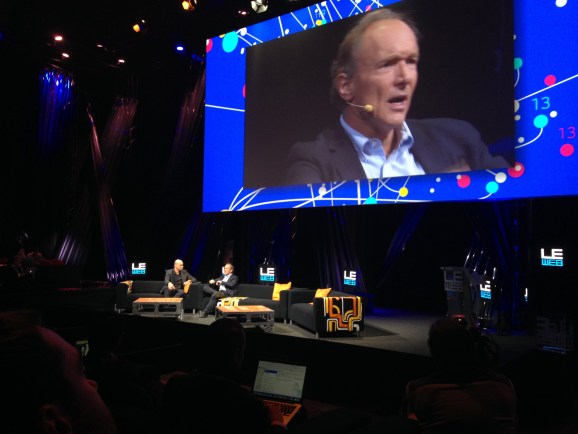 PARIS, France – Apps have swelled in popularity in recent years, and there’s been tons of debate about whether their rise is killing the open web.

So, is the web dead?

Speaking at LeWeb 2014, the guy who actually invented the thing, Tim Berners-Lee, said no. But he’s using the 25th anniversary of its creation to raise awareness of the many threats facing the open web. On that list are the native apps that he says are encouraging people to experience content in an isolated way rather than in a collaborative way.

“If you just take your magazine and put it in an app, it’s boring,” he said. “It’s not part of the conversation. If you build it in a web app, you can have a big discussion.”

When Berners-Lee began working on the web, he was trying to address the problem that there were all these computing systems and platforms that existed separately in isolation. He wanted a platform that united them all and allowed people to share content and collaborate.

Native apps are essentially pulling people back in the opposite direction, he argues. Berners-Lee said he’d prefer to see companies and developers focusing more on building web apps using HTML 5 so content and experiences are more sharable and linkable.

Beyond that, Berners-Lee said he’s increasingly worried about a movement away from so-called ‘net neutrality’ by many governments. He said the average person doesn’t realize that many of the things they take for granted in terms of streaming video and music are at risk if governments don’t do more to ensure open and equal access to the Internet.

On that note, he’s worried that users in general have become too complacent, and he urged people to take a greater interest in the various legal and corporate battles being fought that could affect the future of the open web.