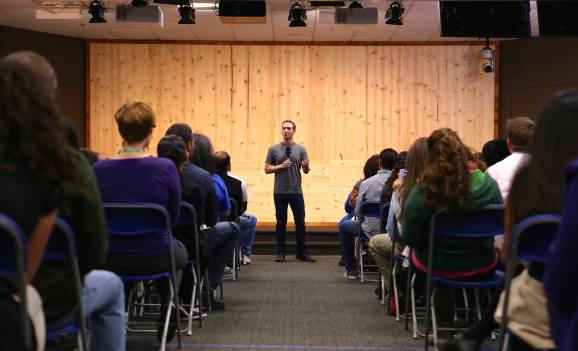 Facebook CEO Mark Zuckerberg said today during a question-and-answer session that there are good reasons that it’s hard to change your username, or to use a fake username, on the social network.

“It’s important that people refer to themselves with their real names, Zuckerberg said. “There are a lot of online communities that are separated from reality and the world.

“That we ask everyone to use their real name kind of grounds it to reality and ties it back to the person’s real identity.”

Zuckerberg answered questions from Facebook members as part of the company’s second community Q&A session, which it live streamed on the web from the company’s headquarters in Menlo Park, Calif.

He added that one of the things people like about Facebook is that they can search for people to connect with by their real names.

Zuck also believes the requirement curbs “bad actors” from lurking around on Facebook and doing bad things under the cover of anonymity. “For bad actors, there is more accountability than if you have some anonymous handle.

“There are lots of reasons but overall I think it’s one of the things that makes Facebook what it is,” the CEO said.

There are exceptions to this rule, however. After much backlash from the drag and LGBT community, Facebook said in early October that it would change its policy requiring all members of Facebook to provide legal names on their accounts. It would, it said, respect that many transgender people identify more with names they choose rather than those they got at birth.

There may also be a First Amendment issue here. The Supreme Court earlier this month heard arguments in the case of a Pennsylvania man who made threats against his ex-wife on Facebook. The court must decide if Anthony Elonis’s words can be considered a criminal threat or if they are protected speech. If the court decides that Facebook comments are protected speech, could users’ chosen names be protected, too?

Of course, Facebook wants users to use their real names and have only a single account, so they can be more easily targeted by the brands that advertise on the site.

But Zuckerberg didn’t mention that.