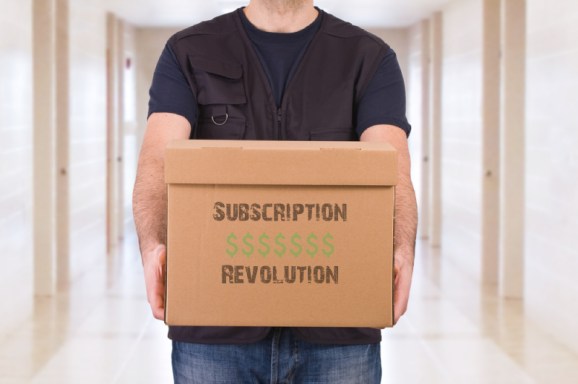 What Marc said then is even truer now. Three years later and you can see the results of the software transformation across essentially every industry. Look at what technology has done for (or to, depending on your perspective) the publishing industry, for example. We’ve moved from reading hardcover books and daily newspapers to consuming bestsellers and today’s headlines on apps and e-readers. And that’s just a slice of this. A tiny one. It can’t be disputed — software’s eaten the world, and as such, so has the software business model. Software used to be packaged up in a box and shipped out to buyers, or purchased on a disc and loaded onto a computer. Now software is sold on a subscription basis and the term “SaaS” is in just about everyone’s vocabulary.

SaaS companies are literally always selling, because they have to keep the customer from hitting the cancel button each month. That means they always have to provide value for their customers, which is a huge departure from traditional vendors that will just stay on-premises until they’re ripped out. That focus on quality, driven by the underlying business model, is part of why software has had the strongest growth rate of any IT category.

That said, the subscription-based business model has so thoroughly eaten software that it’s ludicrous to sell software in any other way now.

Beyond software to commerce

Subscription is at least as powerful in commerce as it is in software. It significantly improves the customer experience and completely revolutionizes the merchant’s business. For consumers, subscription connects them with the best brands, products and services they love and need over a certain period of time. Those brands have to truly resonate with consumers, which is why they’re willing to commit to a recurring payment. The product quality and experience improves because consumers run the show. If they don’t like the product, they can cancel the subscription at any point — game over. Consumers love the subscription model because it means an easy and efficient experience for them.

On the other side of this, subscription enables merchants to build a better business from the ground up. Subscription businesses are based on retention versus conversion, which means a better ROI on customer acquisition. They can better forecast the demand for raw materials, essentially solving the inventory problem. As a result, revenue is more predictable. In the end, businesses are smarter and faster.

But here’s the real trick — I think that subscription is actually better in commerce than it is in software. E-commerce has this huge problem that software doesn’t have — inventory management. Managing inventory is so hard that managing inventory mistakes has spawned an entire industry of businesses. Flash sales are designed to help offload excess inventory that exists due to mistaken estimations of demand. Subscription businesses don’t have this problem. If you’ve got 1,000 subscribers you can pretty accurately calculate how much product to order for those 1,000 subscribers. No more guessing at the seasonal fluctuations.

Let me take a quick step back. When I went to Y Combinator I was aware of subscription commerce as a business model because my wife subscribed to Birchbox and we both subscribed to Barkbox. While there I met a few subscription commerce founders who were doing quite well but had significant and persistent technology problems.  I thought, “there’s a need here” — a need for someone or something to build a back-end specifically for subscription businesses. My friend (and now co-founder) Alex and I decided to look into it. We spoke to 196 merchants who were interested in starting or had already started a subscription service and asked about issues and barriers to entry. The need wasn’t just in my head, it was real.

Fast forward to now. We launched Cratejoy in public beta a few weeks ago and we have over 4,000 merchants on our waiting list. We can see how subscription commerce is growing strongly in areas like cosmetics, apparel and food and beverage. (In fact, 22 percent of subscriptions started on Cratejoy are somehow food-related.) And I did some guerilla math, tracking the revenue growth of a dozen or so early to market subscription businesses, and can see 150 percent growth (at a minimum) in subscription commerce across the industry since 2011. According to Fortune, various subscription commerce companies are growing at an impressive amount. Since launching in 2011, Quarterly.co has doubled in size every six months. NatureBox (launched in 2012) grows by 50-100 percent every month and BarkBox’s subscribers grew from 1,500 to 55,000 between 2012 and 2013.

I would say subscription commerce is about as accessible as e-commerce was in 1999, so basically not at all. According to the U.S. Census, in 1999, U.S. retail e-commerce sales were $15 billion, accounting for 0.5 percent of all retail sales. A later 2009 report shows that U.S. retail e-commerce sales totaled $145 billion equaling 4 percent of retail sales. That’s tremendous growth in ten years and it’s what I see happening for subscription down the road.