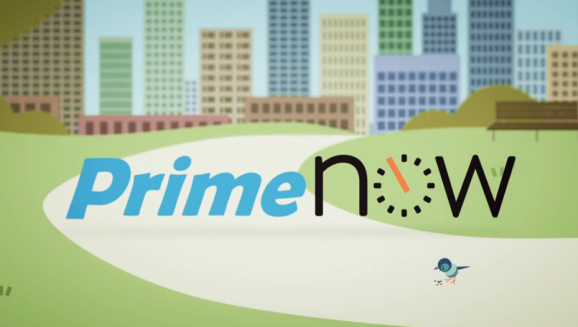 Forget same-day deliveries, Amazon is rolling out a new service called Prime Now that promises to narrow delivery slots to one hour on “tens of thousands of daily essentials.”

As its name suggests, Prime Now is only open to those who subscribe to Prime, which costs $99 a year. It’s only available in Manhattan, New York, for now, although Amazon will bring it to more cities in 2015.

The e-commerce giant has been gradually introducing its same-day delivery service on so-called “essentials” to more and more cities, but you could still be waiting many hours for your items to arrive. With one-hour delivery slots, Amazon is ramping things up a few notches.

The service has its own dedicated mobile app, available on Google Play, Apple’s App Store and the Amazon Appstore.

“There are times when you can’t make it to the store and other times when you simply don’t want to go,” Dave Clark, Amazon’s senior vice president of worldwide operations, said in a press release. “We’ve long felt that Amazon Prime is the best deal in the history of shopping, and now it has gotten even better.”

Though it’s currently restricted in availability, with only a few select areas of Manhattan open for the service, this is a big move from the Internet behemoth as its battles with local retailers intensify. Indeed, Amazon’s move into same-day deliveries was seen as an encroachment on local retailers’ territory, so this latest move compounds matters.

Interestingly, Prime Now is available for most of the day, starting at 6 a.m. and closing at midnight, seven days a week. The one-hour delivery slot will set Prime members back $7.99, so you’ll probably want to order more than a packet of paper towels, but there is also a two-hour delivery window that won’t cost you a penny.

You can read more about the new Prime Now service here.