When it comes to app development, Apple, Google, and Microsoft all have very different strategies that align with their own business models. So with 2014 almost over, we decided to take a look at the trio’s mobile app stores to answer a simple question: How much do the three develop for each others’ competing platforms?

As you might expect, Apple doesn’t bother making apps for Android or Windows Phone at all. Google loves Android and iOS, and it almost completely shuns Windows Phone.

Without further ado, here’s a snapshot of how many apps the three companies offer in each store at the end of 2014: 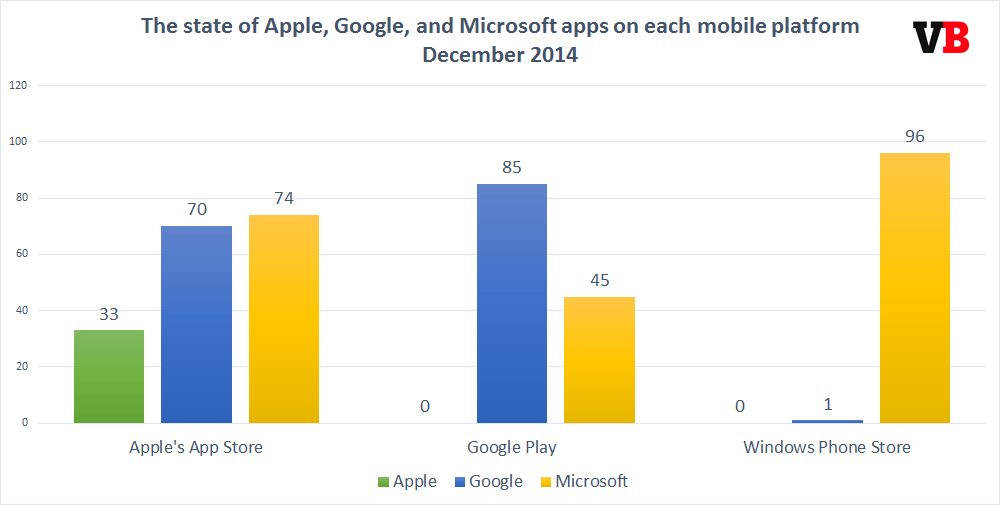 To compile this chart, we tallied up the number of apps published by these companies in each of the three app stores. We’re counting apps listed in the stores, not those that come preloaded on devices. We’d also like to emphasize that not all apps are available in every market, so you may see fewer apps depending on which regional store you are accessing.

Not all apps these companies build for their own platforms are available in their own stores. Thirty-six of the above Windows Phone apps are created by “Microsoft Mobile,” which encompasses all the former Nokia apps that have been rebranded to Lumia, as well a few low-quality or outdated apps that frankly shouldn’t be in the store anymore. Some of the Google apps are very similar (such as Chrome and Chrome beta), since we’re counting individual entries in the store.

Nonetheless, the above chart still gives a rough idea of how the three tech companies interact with each other’s mobile platforms at present.

In 2015, we don’t expect Apple will significantly change its approach to competing platforms. We do look forward, however, to examining the state of the Microsoft’s platform after the Windows Store and Windows Phone Store merge. Will this push Google to start playing ball with Microsoft more? We’ll check back in a year.